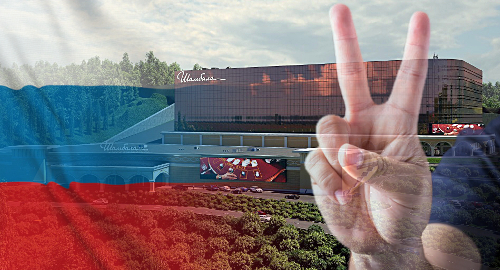 Russia’s most successful casino Tigre de Cristal may finally get some local competition next month in the country’s far east Primorye gaming zone.

A few weeks ago, Konstantin Shestakov, Deputy Prime Minister of the Primorsky Territory, announced that the in-development Shambala casino project would open its doors “in July this year,” although he cautioned that the exact timing “will certainly be made by the owner.”

Dmitry Pisarenko, who was on hand to represent Shambala CJSC, the Russian firm behind the project, confirmed that construction of the Shambala casino was complete. Pisaraneko said the company was now engaged in interior detail work, and that there were “halls where the finish has already been completed.”

Russia is currently struggling to get a grip on its COVID-19 infection rate, and Pisarenko conceded that the pandemic presented some unique problems. But the bulk of the material and equipment had been secured well in advance, which, along with the region’s geographic isolation, allowed construction to continue.

The Shambala project was approved way back in 2017 and will be only the second casino to launch in Primorye, following Tigre de Cristal’s 2015 debut. Cambodian casino operator NagaCorp broke ground on its Naga Vladivostok venue in 2015 but the company said recently that it doesn’t expect the casino to open until 2021.

Other Primorye projects have endured similar setbacks, such as Diamond Fortune Holdings’ Selena project, which broke ground in June 2017 and hoped to open this September. The project ran into some funding issues that were eventually resolved, but not before the project was rechristened Imperial. Its current timeline is unknown.

Other projects, such as the Royal Time Group’s Phoenix project, fell by the wayside over funding issues that prevented the company from meeting its stipulated development timelines.

Tigre de Cristal, which is now majority owned by Alvin Chau’s Suncity Group Holdings, was forced to close its doors in late-March due to COVID-19. The property briefly reopened before closing again and has yet to reopen. But that didn’t stop the Primorsky government from recently naming the casino’s management company G1 Entertainment the region’s Company of the Year for 2019.