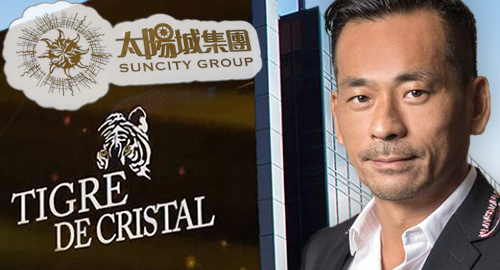 On June 1, Hong Kong-listed Suncity Group Holdings, which is controlled by Alvin Chau (pictured), boss of privately held junket Suncity Group, announced that it and its wholly owned subsidiary Victor Sky were boosting their combined stake in Summit Ascent Holdings from 24.74% to 69.78%. The cost of the transaction is roughly HK$1.24b (US$160m).

Summit Ascent operates the Tigre de Cristal casino in Russia’s far east Primorye gaming zone outside Vladivostok. Suncity bought a small stake in Summit Ascent in 2018, then boosted that to nearly 28% one year ago, after which Chau was named chairman of Summit Ascent.

Summit Ascent also announced plans to increase its share capital to HK$150m divided into 6b shares from HK$80m divided into 3.2b shares. The company expects to raise around HK$1.63b via these transactions, of which around HK$600m will go toward construction of Tigre de Cristal’s Phase II development.

Summit Ascent plans to use most of the remaining proceeds to buy some convertible bonds in Suntrust Home Developers Inc, which is – wait for it – controlled by Alvin Chau. Suncity Group Holdings recently increased its stake in Suntrust from 51% to 74.4%.

Suntrust is building an integrated resort project in Manila called Westside City Resorts, which plans to offer a 400-room five-star hotel and a casino with 400 tables and 1,200 slots when it opens to the public in 2023.

Chau has embarked on a sweeping program of diversification in recent years, shifting away from supplying high-rolling gamblers to casinos across Asia to becoming a full-fledged casino operator in its own right. In addition to the Manila project, Suncity’s various units have casino projects in development in Cambodia and Vietnam, as well as longshot Japanese casino aspirations. (Just don’t mention the online gambling stuff, okay?)