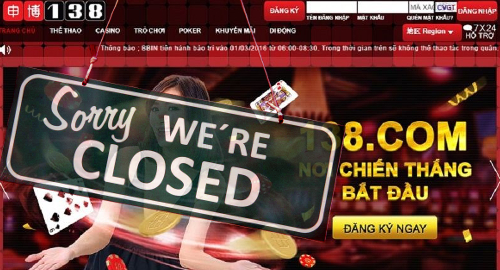 Asian-facing online gambling operator 138.com has shut its digital doors for as yet unexplained reasons, while Mansion88 has closed its operations in Cambodia and Malaysia.

Earlier this month, some Asian online gambling affiliates began reporting that 138.com/138Bet was shutting down. The site first claimed that customers would be able to withdraw their funds, then alerted its suppliers that their services were no longer required and abruptly went black.

The reason(s) behind 138’s rush to the exits remains a mystery. Some Asian affiliates claimed that the site had shut only temporarily due to its support services in the Philippines being closed as a result of that country’s COVID-19 mitigation efforts. But that seems unlikely, given that the site is completely offline.

Other sources have claimed that the site was shut because its parent company Suncity Group – Asia’s dominant casino junket operator – was under internal pressure from shareholders to shed ties with its online gambling operations once and for all.

138.com began life as 138SunGame (aka Suncity) before rebranding in 2013 as it began a push into European markets (primarily aimed at Chinese ex-pats). The site was run by the Isle of Man-based Xela Holdings Ltd/TGP Europe and the UK-facing 138.co.uk continues to operate under a Fesuge Ltd license.

In July 2019, Suncity found itself in the uncomfortable crosshairs of Chinese state media, which accused the company of being the single largest online gambling operator targeting customers on the Chinese mainland, where gambling of any form other than the state-run lotteries is strictly illegal.

Suncity publicly insisted that all its activities were legal in the jurisdictions in which they were licensed to operate. However, Suncity was running lucrative online ‘proxy betting’ operations from its Philippine-based VIP rooms, and the company eventually agreed that it would in future not operate any services that were illegal under the laws of Macau.

China is always issuing warnings to unauthorized online gambling operators but the rhetoric ratcheted up a notch this year, with plans for a ‘whistleblower’ platform and a new focus on underground banking’s role in online gambling activity.

It’s entirely possible that Suncity’s shareholders simply felt the regulatory heat was making it unwise to remain in this Chinese kitchen much longer. Suncity just announced that shareholders would be spared the net losses the company has racked up over the past three months due to pandemic-related casino closures. An olive branch?

Meanwhile, online gambling operator M88 (Mansion88) will reportedly withdraw its services from both Cambodia and Malaysia on May 31. Customers were told that “all promotions have been discontinued with effect from May 25. You can still continue to play with your existing funds in the wallet or you may wish to withdraw by May 31.”

The company reportedly viewed the two markets as small fish compared to its operations in China, Thailand and Vietnam. A quick scan of our M88 article history will show the latter market is perpetually busting local agents who recruit gamblers to play on M88, which has been dubbed the most popular betting site in a country where such activity remains illegal.

Becky’s Affiliated: What is the opportunity for affiliates in eSports betting
Becky Liggero Fontana
20 August 2015