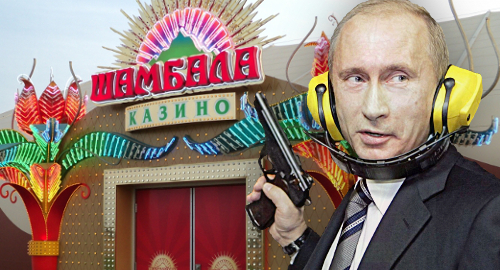 A Russian casino operator has written an open letter to President Vladimir Putin asking him (a) not to close the Azov-City casino zone, and (b) don’t send me to Siberia.

The three casinos in the Azov-City gambling zone, located in Russia’s southwestern Krasnodar Krai region, have been ordered to shut down by January 1, 2019. The shutdown was ordered last year by Putin to allow the opening of a new gaming zone in the nearby Sochi region.

That shutdown was actually an extension of an earlier order that required the casinos to close by April 2015, and Shambala’s Smolentsev said last year that he suspected the latest shutdown order may also not be carved in stone. But the Russian Duma has approved legislation calling for the Azov-City casinos to wrap things up as scheduled, leaving Smolentsev with no option but to make a public plea to Putin.

Smolentsev’s letter reminds Putin that closing the casinos will thorw 2k Russians out of work and deprive the local government of an annual RUB 400m (US $6.9m) in tax revenue. Smolentsev insists that “dear Vladimir Vladimirovich” doesn’t need such “a social explosion in the Krasnodar Territory.”

Smolentsev then puts on his agitator hat and says the lack of “any intelligent reasons” for closing the Azov-City casinos suggests that the state is playing “a really dishonest game.” Smolentsev says Azov-City investors were “deceived” eight years ago by officials who promised that the zone’s status wouldn’t be messed with “for 50 years.”

It remains to be seen whether Putin proves amenable to Smolentsev’s pleas or whether Smolentsev discovers Putin’s ‘little green men’ arriving at his door in the middle of the night for a quiet word.

The only casino currently open for business in Primorye is Lawrence Ho’s Tigre de Cristal, which celebrated its second anniversary last weekend.

Russia orders Azov-City casinos to close by Jan 1, 2019; not all operators convinced
Steven Stradbrooke
4 May 2016