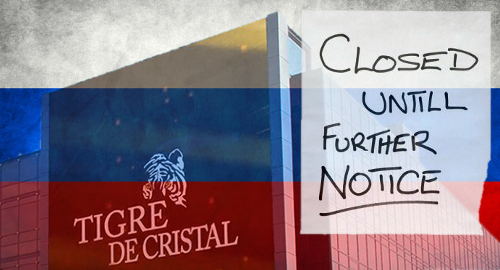 Russia’s land-based gambling operators are finally taking the hint and suspending activities during a pandemic, while online sportsbooks are scrambling to offer customers anything on which to wager.

On Friday, Hong Kong-listed Summit Ascent Holdings announced that its Tigre de Cristal casino in Russia’s Primorye gaming zone outside Vladivostok was temporarily suspending its gaming operations starting Saturday (28) and extending through April 5. The intention is to “prevent crowds from gathering” during the COVID-19 coronavirus pandemic.

Casinos in Russia’s Krasnaya Polyana gaming zone in Sochi announced Thursday that they would “temporarily suspend the admission of guests” on the advice of the region’s medical authorities. The Altai Palace casino in the Siberian Coin gaming zone is also shutting down its gaming operations “until a new government order” is issued.

Similar shutdown notices were issued this week by Russia’s racetracks, including the Central Moscow Hippodrome and the Krasnodar Hippodrome. The tracks had attempted to continue operations with no spectators in the stands but have since bowed to the inevitable and stopped threatening the health of trainers, jockeys and track officials.

Until recently, Russia’s leadership had portrayed COVID-19 as a problem for other nations but its suspiciously low number of confirmed infections jumped this week, with most of the cases located in the Moscow area.

Russian bookmakers, like those around the world, were already suffering due to the mass cancellations of global sports events. Betting volume has reportedly dropped off by more than 50% and could tumble much further if the Belarus Premier League surrenders its current unicorn status as the only major football body still functioning.

Russian bookmakers have appealed to the government for tax and rates relief, including foregoing their mandatory annual contribution of 5% of their betting revenue – with minimum payments of RUB15m (US$190k) per quarter – to local sports leagues.

Russian bookies are also getting creative to fill the gaps on the sports calendar. Betcity has begun offering prop bets on when certain sports leagues will resume activity, with the Russian Premier League (RPL) currently pegged as the league that will be first out of the gate.