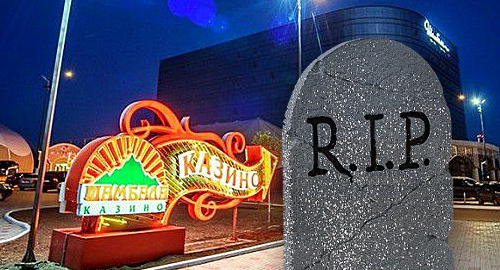 Russia has issued a formal death sentence for one of its designated gaming zones, while a nearby zone rolls out the welcome wagon for a new casino.

The order didn’t come as a complete surprise, as the government announced its original plan to close Azov-City’s three casinos way back in 2015. And while the government offered Azov-City’s operators a few extensions on this closure order, they ignored pleas for a policy rethink.

Further twising the knife, Russia introduced legislation this spring that would compensate casino owners if the government decided to scrap any of its handful of gaming zones, but specifically exempted the Azov-City region from even applying for this compensation.

At the same time Russia issued its original Azov-City death sentence, the government expanded the Krasnaya Polyana zone’s boundaries to include the city of Sochi, in the hope that casinos would enable Sochi to maintain its tourism business following the 2014 Winter Olympics.

There is presently only one other gaming venue in the Krasnaya Polyana region — the Bonus slots hall that opened in December 2017. The two venues attracted a whopping total of just over 55k customers in the month of August, which (amazingly) exceeded total customer traffic at the three Azov-City casinos by over 11k.

The Primorye gaming zone outside Vladivostok in Russia’s far east — where Azov-City operator CJSC Shambala is building a new casino — is by far the most successful of Russia’s geographically isolated gaming zones, which were established in 2009 in an apparent bid by Vladimir Putin to keep Russians from enjoying themselves. To which we say, mission accomplished, Vlad.