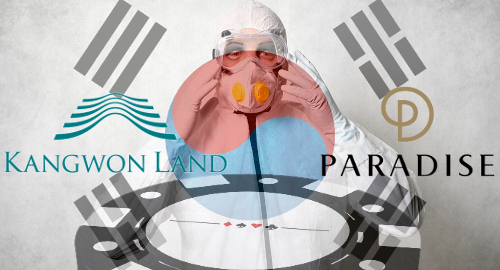 South Korea’s casino operators are counting the cost of their lengthy COVID-19 shutdowns even as the country braces for a new wave of infections.

On Tuesday, Kangwon Land, the country’s largest casino operator and the only gaming venue that is allowed to welcome local residents, reported that its revenue over the first three months of 2020 had totaled KRW236b (US$193m), a 36.7% decline from the same period last year.

The losses were in part blamed on increased payments to the casino’s host community, which is home to a shuttered coal mine and which has come to depend on the resort to offset the lack of mining income.

Kangwon Land halted operations on February 23 as South Korea tried to minimize further spread of the COVID-19 pandemic, and the property didn’t reopen until last Friday. The company said last week that the shutdown would cost it around KRW267.8b ($219m) in lost revenue.

Local rival Paradise Co Ltd, which operates four foreigner-only casinos, said Tuesday that its Q1 revenue was down a more modest 8.5% to KRW184.7b. Paradise booked a net loss of KRW5.6b in Q1, although this was a significantly better result than the KRW13.7b loss in the same period last year.

Paradise shut down later (March 23) and was the first Korean operator to resume operations in mid-April as the country’s infection rate flattened. But the company said it planned to maintain its cost controls in the current quarter after cutting costs nearly in half during Q1.

That may prove a prudent strategy, as South Korea has seen a surge in new COVID-19 infections over the past few days, nearly all of which appear to be linked to several nightclubs in Seoul that were allowed to reopen over the past week. Authorities are now contact tracing thousands of individuals who may have been exposed.

Should the infection rate continue to rise, the fear is that the country will head back into lockdown, with casinos likely among the first businesses that will be required to shut.