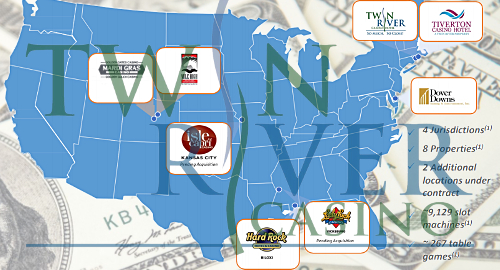 The results don’t include contributions from the three casinos in Black Hawk, Colorado that TRWH formally absorbed in January. TRWH’s operations will further expand when the acquisition of two former Eldorado Resorts properties – Isle of Capri Kansas City and Lady Luck Vicksburg – closes sometime in Q2.

The add-ons bring the number of casinos that TRWH owns and manages to seven – two in Rhode Island, one in Mississippi, one in Delaware and three in Colorado, plus a racetrack with 13 off-track betting licenses. With all these changes afoot, TRWH expects its 2020 adjusted earnings to come in around $180m, an 8% rise over 2019.

TRWH inked a joint venture deal in January with tech supplier International Game Technology (IGT) that sought to resolve their longstanding dispute over the electronic gaming machines in the two Rhode Island casinos that TRWH manages on behalf of the state government.

The deal, which will see TRWH supply 23% of the two casinos’ slots, won’t officially take effect until January 1, 2022, but TRWH said it hopes to start supplying the machines by July of this year.