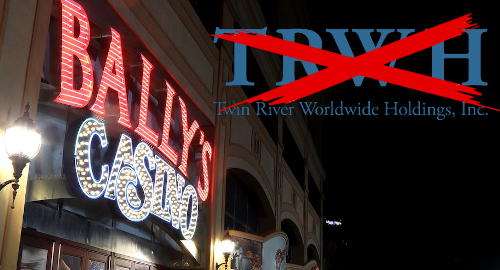 US regional casino operator Twin River Worldwide Holdings (TRWH) is officially rebranding under the Bally’s name, while its Atlantic City casino of the same name is adding a FanDuel-run retail sportsbook.

On Wednesday, the Rhode Island-based TRWH announced plans to change its corporate identity to Bally’s Corporation effective November 9, with its stock to trade on the New York Stock Exchange under the new ticker symbol ‘BALY’.

Two weeks ago, TRWH announced its intention to eventually rebrand “virtually all” of its expanding casino portfolio under the Bally’s name and logo, which followed the company’s purchase of the Bally’s Atlantic City casino from rival Caesars Entertainment in April. (Caesars retained the right to continue operating the Bally’s Las Vegas Hotel & Casino under its existing name.)

Papanier edged a little further out on this limb by saying the new brand identity was integral to the company’s plan to become “the first omni-channel gaming company to seamlessly integrate and operate physical casinos with digital solutions.” (Does anyone have the heart to tell George this is everyone’s strategy, and that many of TRWH’s rivals are way ahead of it?)

TRWH said earlier this month that part of its rebranding strategy would involve the launch of a national sports betting operation. On that note, Flutter Entertainment’s FanDuel Group announced Wednesday that it had been chosen to launch an in-person sportsbook at Bally’s Atlantic City.

Bally’s AC already has a sportsbook but the Wild, Wild West section of the casino it resides in isn’t part of the sale from Caesars. Assuming New Jersey regulators approve the casino’s sale to TRWH, FanDuel told the Associated Press it will launch a temporary sportsbook at Bally’s by year’s end, with a permanent betting operation coming next spring.

FanDuel already powers betting operations at one of TRWH’s Colorado properties and Papanier said he was “thrilled” to work with such “great partners” in another state. FanDuel currently runs New Jersey’s most successful betting partnership with the state’s Meadowlands race track but (until now) lacked a physical presence within AC.