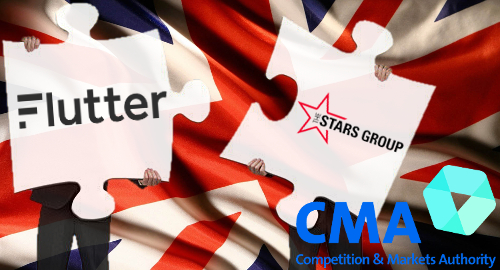 The UK’s competition watchdog is studying the proposed union of online gambling giants Flutter Entertainment and The Stars Group (TSG).

On Wednesday, the UK’s Competition and Markets Authority (CMA) announced an inquiry into the proposed deal to combine the operations of Flutter and TSG. The merger, which was announced last October, would create a gambling behemoth with estimated annual revenue of nearly £4b and a valuation of around £10b.

Given that the companies’ combined operations would control an estimated 40% of the UK’s online sports betting activity and around one-quarter of the UK’s overall online gambling market, the CMA believes a closer inspection of the deal is warranted to ensure it won’t result in “a substantial lessening of competition within any market or markets in the United Kingdom for goods or services.”

The CMA informed both companies of its decision on Tuesday and is now soliciting public comments on the proposed merger until February 18. The CMA plans to issue a ‘phase 1 decision’ on its findings by March 31, long before the two companies expect their deal to close by the second or third quarter of 2020.

Shareholders in both companies reacted with mild disinterest to the CMA’s announcement, with little movement in either company’s shares on their respective exchanges.

TSG has been down this road before, following the company’s $4.7b acquisition of UK gaming operator Sky Betting & Gaming in April 2018. The CMA initially ordered a freeze on the two firms’ integration process but ultimately approved the acquisition that October.

A similar regulatory probe may be forthcoming in Australia, where Flutter and TSG have a major presence through their Sportsbet and BetEasy brands, which collectively control around one-quarter of the local online betting market. The Australian Competition and Consumer Commission has yet to indicate whether it’s looking at the merger.