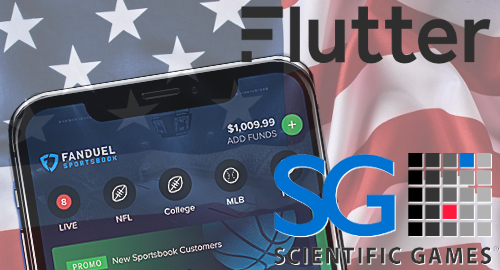 Sports betting operator FanDuel and gaming technology provider Scientific Games Corp have struck up an online gambling and wagering deal for the US market.

On Monday, Bloomberg News reported that Sci-Games had reached a deal with UK-listed Flutter Entertainment to provide Flutter’s FanDuel brand with an online and mobile sports betting and casino product for the US market, both in states where FanDuel currently operates and other states in which the brand has yet to launch.

On Tuesday, Sci-Games issued an extremely brief statement confirming that it has “expanded its existing partnership with Flutter Entertainment to cover online and mobile sports betting and iGaming content offering with FanDuel in the United States.”

Flutter was making use of Sci-Games’ popular OpenBet sports betting solution long before Sci-Games acquired OpenBet in early 2018. In fact, OpenBet and Flutter (under its former identity Paddy Power Betfair) have teamed up to provide other entities with sports betting capabilities in the past.

IGT has yet to react publicly to the media reports or Sci-Games’ statement, but IGT’s stock actually enjoyed a healthy spike on Tuesday. Sci-Games also enjoyed a significant jump in its market cap on Monday but gave most of it back on Tuesday, closing down nearly 2%.

The Sci-Games deal would seem to be less cause for concern for GAN, on whose back-end platform FanDuel’s product sits, but GAN’s shares closed out Tuesday’s trading on the London Stock Exchange down 2.8%. (Go figure.) GAN recently announced that it was filing papers with the US Securities Exchange Commission to seek admission to trading on the NASDAQ.