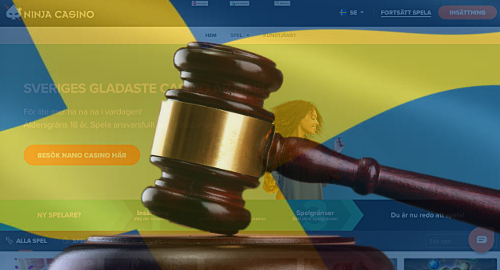 Sweden’s gambling advertising rules may finally get some clarity as a trial involving Ninja Casino’s promotional efforts gets underway.

The KO took exception to Ninja Casino’s online marketing, which told customers that they could “take home the millions” while promising faster withdrawals than other gambling sites. Customers of Stockholm’s public transport service also took exception with Ninja Casino’s “aggressive” promos that promised to get money into players’ accounts before they arrived at the next subway station.

Global Gaming’s former CEO Joacim Möller said at the time that the company had every right to promote its quick withdrawals, calling it Ninja’s unique selling point.

Sweden’s gambling regulations require licensees to exercise ‘moderation’ in promotional activity, but the vagueness of this requirement has been criticized by operators who say the Spelinspektionen regulatory body hasn’t established firm criteria for what constitutes ‘moderate’ advertising.

On Wednesday, local media quoted KO counsel Gunnar Wikström saying the government hoped the Ninja trial would establish some precedent for what constitutes gambling advertising’s red lines. A verdict in the case is expected to be handed down in three weeks.

SWEDISH MINISTER THINKS OPERATORS ARE LEARNING ADVERTISING LESSONS
Earlier this month, Sweden’s Minister for Public Administration Ardalan Shekarabi was named the country’s Minister for Social Security but the government decided that gaming-related issues would follow Shekarabi to his new role.

Shekarabi told local media he was “very happy” to retain control over gambling issues, which he’s been involved with since 2014. Shekarabi also revealed that he’d witnessed some progress in Swedish-licensed operators approach to their marketing efforts in recent months.

Shekarabi, who in April suggested the government was considering “a total or partial ban on gambling advertising,” now claimed to be “very pleased” to have seen gambling ad trends “going in the right direction both in terms of the aggressive tone but also in terms of volume.” Shekarabi said there’d been “a significant change, which I welcome.”