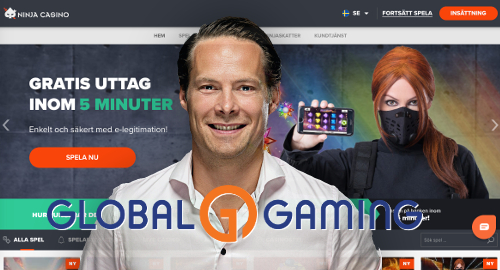 Online casino operator Global Gaming has bid buh-bye to its chief executive as the company continues to struggle to adjust to Sweden’s new regulated market.

On Monday, the Sweden-based Global Gaming announced that it had appointed Tobias Fagerlund as its acting CEO. Fagerlund, a board member since 2016, replaces Joacim Möller, who “will leave his assignment in the Group with immediate effect.” The company said the search for a permanent CEO would start “immediately.”

Möller (pictured, in white) had only occupied the CEO’s office for one year but the company’s official statement on Möller’s exit notes that the new regulatory scheme that launched in Sweden on January 1 “has led to major changes for all gaming operators in the Swedish gaming market, not least for Global Gaming.”

Global Gaming operates a number of successful Swedish-facing brands, including Ninja Casino, but recent stats have shown that the country’s two former gambling monopolies are dominating the new regulated online market at the expense of these international brands.

In mid-April, Global Gaming disappointed its shareholders by scrapping a planned dividend, citing reduced revenues in the Swedish market post-liberalization. The company’s Q1 revenue totaled SEK163m (US$17.1m), down 18% year-on-year, while the company booked a SEK45m operating loss from the SEK29.3m profit in Q1 2018.

On Monday, Global Gaming reassured investors that the company could compete in Sweden’s new market but said the company’s “adaptation” needed to be “further intensified,” and that this metamorphosis would require “new leadership.”

The company initiated an ‘action program’ to adjust to the new Swedish reality, which includes matching expenses to the new revenue expectations. On April 15, the company said this program would intensify in the current quarter and “the majority” of the results would be on full display in the second half of 2019.

Among these reduced expenses will be marketing, which has proven a thorny subject in Sweden’s new market. Last week, the government announced the formation of a commission to consider whether to impose a total ban on gambling advertising based on its view that the current situation was “unsustainable.”

Ninja Casino’s ads have occasionally drawn fire from Swedish authorities, including a court case launched by the country’s consumer ombudsman in December, while Ninja’s subway ads came under criticism in January for allegedly not adhering to the government’s vague requirement for ‘moderation’ in gambling marketing.