Singapore’s casino fines up more than tenfold in 2018-19 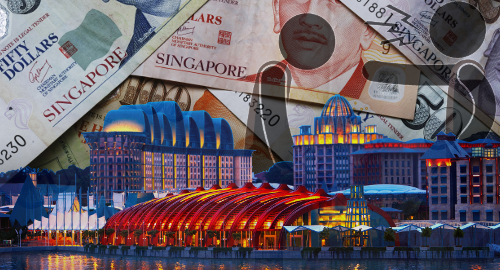 Singapore’s gambling regulatory body’s financial penalties on its two casino licensees jumped more than tenfold in its most recent fiscal year and one of the casinos was far more guilty than the other.

The CRA doled out SG$745k (US$540,600) in penalties during that period, a significant hike from the SG$60k penalty total in the previous fiscal year. The increase was entirely due to major penalties imposed on Genting’s integrated resort.

Resorts World Sentosa was fined three times for a total of SG$730k, including a SG$400k penalty for failing to implement a CRA-approved system of internal controls and a SG$250k fine for failing to comply with a direction that relates to the conduct, supervision or control of casino operations. Genting was also dinged SG$80k for allowing five persons under 21 years of age to access its casino floor.

Marina Bay Sands was also fined for allowing underage access, but only just the one person, for which it paid a penalty of SG$10k. MBS was also fined SG$5k for allowing a Singaporean permanent resident to access the casino floor without evidence that he/she had paid the SG$100 entry levy imposed on local gamblers.

CRA CEO Teo Chun Ching said the two casino operators had made “improvements to their work processes and stepped up measures to enhance their compliance towards the regulatory requirements.” Both casinos had their licenses renewed for three-year terms earlier this year, and both are planning major expansions of their operations.

SINGAPORE POOLS SEES ONLINE BETTING SPIKE
Across town, the state-run Singapore Pools lottery and sports betting monopoly is making the most of its new digital betting channels, which made their debut way back in 2016. While Singapore Pools – and the state-run Singapore Turf Club race betting business – said last year that online access hadn’t led to a ‘surge’ in overall betting volume, it appears local punters are more frequently choosing the digital option.

In August, Second Minister for Home Affairs Josephine Teo announced that Singapore Pools was deriving 60% of its betting handle through its website and mobile app, twice the percentage from three years ago, and Teo said this trend is expected to continue.

The digital gains are at least partly attributable to the fact that Singapore Pools took over the Turf Club’s operations last year in a bit to “achieve synergies and improve cost efficiencies.”