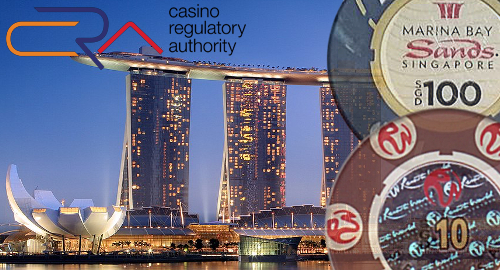 Singapore’s two casinos are either getting better at compliance or the city-state’s new gambling regulator is slacking off on the job.

The Casino Regulatory Authority of Singapore (CRA) recently issued its 2017-18 annual report, covering the 12 months ending March 31, during which the regulator levied total financial penalties of SG$60k (US$43,400) against the operators of the Marina Bay Sands and Resorts World Sentosa integrated resorts.

Genting Singapore’s Resorts World Sentosa earned the bulk (SG$55k) of the year’s fines for permitting three underage gamblers and one excluded person to gain access to its casino floor. Las Vegas Sands’ Marina Bay Sands was penalized SG$5k for allowing a permanent resident to access its gaming floor without having paid the SG$100 casino entry levy the CRA imposes on local gamblers.

CRA chairman Tan Tee How, who assumed command of the regulator on April 2, added that “casino-linked crime” related to the two mammoth gaming operations was “under control,” representing “less than 1%” of Singapore’s overall crime. Tan further claimed that “organized crime has not entrenched itself in the casinos.”

Tan also celebrated recent statistics which indicated that Singapore’s overall probable pathological and problem gambling rates had remained stable since the two casinos opened in 2010, and were “presently below 1%.”

The problem gambling benchmark is at odds with Singapore’s status as the world’s top jurisdiction when it comes to per capita gambling spending. This summer, Global Betting & Gaming Consultants reported that Singapore residents spent an average US$937 on legal gambling activities, handily outstripping runner-up Australia ($729) and the rest of the top-five: Hong Kong ($566), Canada ($379) and Finland ($354).