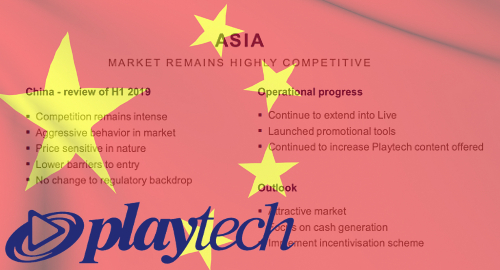 Investors largely shrugged at the news, as Playtech’s shares closed out Thursday’s trading up less than 1%. That optimism may have something to do with the company’s announcement that it will spend €25m buying back its own shares alongside an interim dividend (albeit one that is half of what was previously promised).

Playtech’s revenue gain was largely attributable to the company’s acquisition of Italy’s market-leading operator Snai, which contributed 90% of Playtech’s H1 B2C gambling revenue of €438.2m. On a pro forma basis, which assumes that Snai was part of Playtech throughout all of H1 2018, Snai revenue was down 11% due to Italy’s new tax hikes, which pushed Snai’s gaming machine business down 18%.

Last November, Playtech claimed that its Asian operations had “stabilized” at an annual run-rate of €150m. The company now says it expects €115m in Asian revenue this year, and that figure may fall further depending on whether the Philippines – home field for Playtech’s B2B Asia partners – follows through on China’s suggestion that the country “ban all online gambling.”

Thanks to the Asian decline, the boost from Snai and the launch of Sweden’s new market, regulated market operations accounted for 87% of Playtech’s gambling revenue, 18 points higher year-on-year. The company said regulated markets in Europe, Latin America and the US “remain key to our continued growth.”

That was the sole mention of Playtech’s US market ambitions in its H1 report, although the company did announce it would update the market on its US strategy at its investor day in November. By contrast, Playtech’s European rivals haven’t been able to shut up about their US market opportunities, which may indicate some skepticism in Playtech’s corner offices about how US regulators will view the company’s black-market operations (particularly given the regulatory grilling that GVC Holdings’ CEO was subjected to in Nevada regarding his company’s unregulated operations).