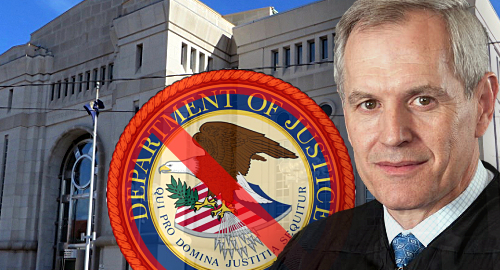 America’s intrastate online gambling operators are celebrating a federal court ruling that restricts the scope of the Wire Act to interstate sports betting.

On Monday, US District Court Judge Paul Barbadoro issued a ruling striking down the new opinion on the scope of the 1961 Wire Act – which prohibits the interstate transmission of wagering information – issued last year by the US Department of Justice’s Office of Legal Counsel (OLC).

The New Hampshire Lottery Commission (NHLC) challenged that opinion, arguing that the DOJ’s new catch-all position threatened its online lottery sales and possibly even land-based sales of Powerball tickets. The DOJ tried to argue that the NHLC lacked standing to challenge the new opinion because the text didn’t explicitly target state lottery operations.

STAND DOWN
Barbadoro (pictured) rejected the notion that the NHLC lacked standing, saying the NHLC had “openly engaged for many years in conduct that the 2018 OLC opinion now brands as criminal.” Barbadaro said there was a “substantial” risk that the DOJ would prosecute the NHLC, which had indicated it intended to continue its online activities.

Barbadoro also rejected the DOJ’s claim that there was only a low risk that the NHLC would face prosecution, noting that “the record tells a different story.” Barbadoro pointed out that the 2018 opinion specifically mentioned that some states had commenced online lottery sales following the 2011 opinion.

The DOJ had also announced a 90-day grace period to allow entities conducting business online on the strength of the 2011 opinion to “bring their operations into compliance with federal law,” without any suggestion that state lotteries were exempt from this requirement.

In short, Barbadoro said “this is no hypothetical case” because the NHLC faced “a sufficiently imminent threat of enforcement.” The NHLC was left with the choice of facing criminal prosecution, shutting down their operations, or taking “significant and costly compliance measures that may not even eliminate the threat.”

SUMMARY JUDGMENT
The 2018 opinion hinged on the DOJ playing Grammar Nazis, specifically, claiming that the lack of a comma in a clause defining the illegality of transmitting wagering information didn’t limit the illegality to sports betting. Not surprisingly, the NHLC took the opposite view.

Barbadoro said neither interpretation of the Wire Act’s tortured syntax “creates a perfectly wrought text,” and thus Barbadoro relied on “the significant contextual evidence that calls the OLC’s current interpretation into question.” Barbadoro ultimately determined that the DOJ’s own contextual arguments “do not withstand scrutiny.”

Barbadoro granted the NHLC’s request for summary judgment, stating that the DOJ had produced “a capable, but mistaken, legal opinion that no additional process can cure. The proper remedy is to ‘set aside’ the 2018 OLC opinion.”

WHAT NOW
The DOJ will undoubtedly appeal Barbadoro’s ruling up the legal food chain, as the judge himself had previously suggested the case would likely end up at the US Supreme Court regardless of which side prevailed in his court.

In ordinary circumstances, the DOJ might conclude that its 2018 opinion was built on a fundamentally shaky foundation and concede the matter here and now. But given that the 2018 opinion was widely viewed as scratching the back of GOP campaign mega-donor Sheldon Adelson, the DOJ may just continue to swing for the fences. After all, it’s not like they’re spending their own money here, and there’s another election coming up next year.

In the meantime, Barbadoro’s ruling will take the heat off states like Pennsylvania that were in the process of launching their first online casino and poker operations. Other states that have expressed tentative interest in reaping the rewards of their own intrastate online markets may now feel a little more confident in continuing down that path.