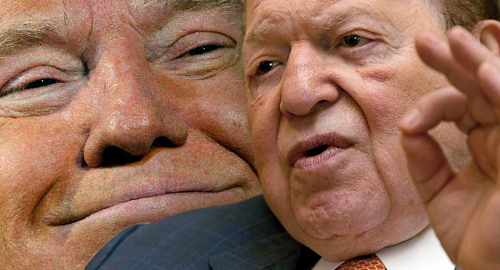 Casino titan Sheldon Adelson has given half a million dollars to help keep Donald Trump’s cronies out of federal prison.

On Friday, ABC News reported that Las Vegas Sands boss Adelson and his wife Miriam had contributed $500k to the Patriot Legal Expense Fund Trust, which was set up in February 2018 to help Trump associates caught up in special counsel Robert Mueller’s probe into Russian interference in the 2016 presidential election.

The Adelsons’ $500k gift is reportedly the Trust’s largest contribution to date and more than three times the next highest donation. Phil Ruffin, another casino industry veteran who once planned a Las Vegas joint venture with Trump, reportedly gave the fund $50k.

The Adelsons have been major Republican campaign donors for years and were early supporters of Trump’s presidential aspirations. Following the 2016 election, Adelson gave $5m to Trump’s inaugural committee and Trump awarded Miriam the Presidential Medal of Freedom last November.

Adelson has claimed that it was Trump’s support for Israel that originally convinced the casino mogul to open his wallet, but Trump’s quid pro quo took a more domestic stance last month when the US Department of Justice revised its opinion on the scope of the 1961 Wire Act to include other forms of online gambling other than sports betting.

Adelson is well known for his animosity towards online gambling and for years his minions had pressed Congress to pass legislation known as the Restoration of America’s Wire Act to reverse the 2011 DOJ opinion that allowed individual states to launch intrastate online gambling markets.

Shortly after the DOJ’s new opinion was issued, the Wall Street Journal reported that the legal reasoning behind the opinion appeared to be ‘inspired’ by arguments submitted to the government by an Adelson-funded lobbyist in April 2017.