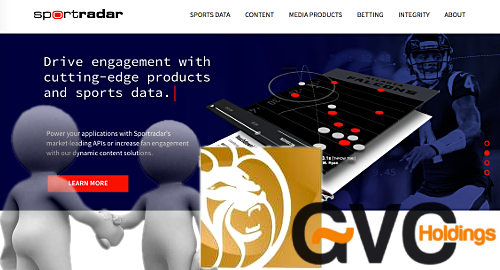 The online gambling and sports betting joint venture of MGM Resorts and GVC Holdings has signed an exclusive data supplier deal with Sportradar.

On Thursday, US casino operator MGM and UK-listed gambling operator GVC announced that they had reached an agreement with sports data provider Sportradar to become the MGM GVC Interactive joint venture’s exclusive data provider for sports betting purposes in US legal wagering markets.

The deal covers “a wide range of pre-match and live betting services along with bet simulation content such as live match trackers.” Sportradar will supply the JV with data from “certain US sports leagues which Sportradar has the right to distribute.”

Sportradar’s VP Gaming Sales Neale Deeley thanked the JV partners for their “endorsement,” saying the company has “for some time” been preparing for the US betting market to go legit. That goal became a reality this spring when the US Supreme Court struck down the federal betting prohibition.

Adam Greenblatt, who was recently named CEO of MGM GVC Interactive, called Sportradar “a great partner” to help the JV achieve its “clear and simple objective” of providing US bettors with “the best and broadest range of products in the market.”

MGM has led its US casino rivals in establishing official gaming partnerships with US sports leagues, signing with the NBA in August and the NHL last month. Both deals allow MGM access to proprietary league data for wagering purposes, particularly in-play betting, which has become the dominant form of wagering in more mature markets such as the UK. Sportradar is the official distributor of NBA and NHL data.