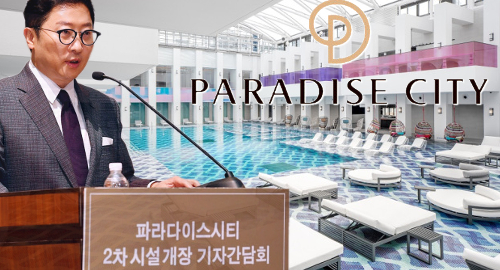 South Korea’s first (and to date only) major integrated resort casino Paradise City is set to grow larger this month as the property opens its second phase.

The new features include a shopping plaza, a spa facility complete with infinity pool and ‘aqualoop waterslide,’ a 3k-capacity nightclub (the largest in Northeast Asia, a 58-room boutique hotel, a film and TV production studio, plus an art exhibition hall that will eventually host 2,740 objets d’art. A kid-friendly theme park, Wonder Box, will join these amenities in the first half of 2018.

The $1.4b Paradise City opened its doors in April 2017, but it limped rather than exploded out of the gate, the victim of a diplomatic spat between South Korea and China that caused the latter country to cut off the flow of tourists to South Korea’s Chinese-reliant casinos.

Property GM Ahn Chang-wan added that, while Chinese tourism may have slipped, “the number of visitors from Southeast Asian countries have significantly gone up, and we plan to target those countries to attract more foreign tourists.”

Meanwhile, Paradise rival Grand Korea Leisure (GKL) reported this week that its August casino sales were up more than one-fifth in August. Total sales in August were KRW50.7b (US$45.3m), a 21.8% rise over the same month last year and a 37.4% improvement over July’s result.