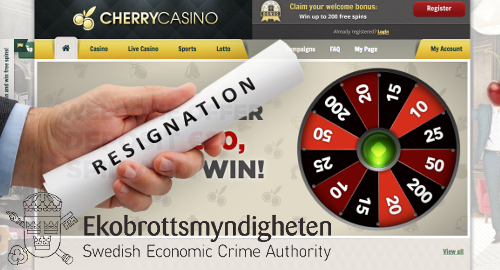 Last Friday, Cherry issued a statement confirming the resignations of two members of the company’s board of directors. Both Anna Bergius and Claes Ruthberg submitted their decisions to resign their board seats with immediate effect.

The statement indicated that the members arrived at their decision after receiving word from the Swedish Economic Crime Authority that they were under suspicion of committing crimes connected with the ongoing probe into alleged insider trading by Anders Holmgren, Cherry’s former CEO who was sacked in May, just days after the investigation became public knowledge.

Holmgren stands accused of buying a significant number of his company’s shares ahead of a favorable first-quarter earnings report, the details of which ran contrary to the profit warning the company issued last November due to issues integrating its new ComeOn asset.

Last week’s dual resignations leave Cherry with only four current board members, although the company notes that its Articles of Association require it to maintain at least three and no more than nine members. Regardless, board chairman Morten Klein is having talks with the Nomination Committee with regard to filling out the empty seats.

The legal drama has spoiled an otherwise positive financial story for Cherry, which reported profit over the first half of 2018 more than doubling year-on-year. Gunnar Lind, who was named acting CEO following Holmgren’s incarceration, credited “expansion and investment” for goosing the H1 figures.

That expansion has included Cherry acquiring a Polish betting license, while its affiliate marketing offshoot Game Lounge announced its first foray into the Americas this month via the acquisition of two online domains – the New Jersey-facing BetNJ.com and the Mexican-facing OnlineCasino.mx. Both sites are expected to launch in the current quarter.