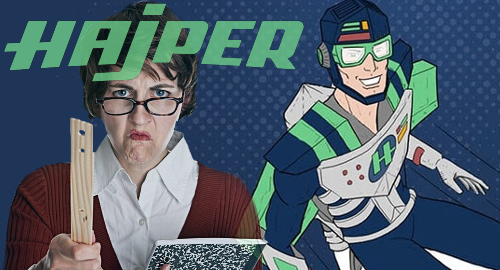 Online gambling operator Cherry AB’s Swedish-facing Hajper casino brand has been spanked by the country’s advertising ombudsman for using cartoon imagery that might appeal to children.

Late last month, the Reklamombudsmannen (RO) advertising watchdog issued a ruling regarding two poster ads promoting Cherry’s Hajper online casino brand, which the company launched in Sweden in May 2018. The posters were displayed in Stockholm’s subway and resulted in two complaints from concerned commuters.

According to these complaints, the posters featured a cartoon male superhero figure with a capital H on his chest. Text accompanying the image promoted both the potential jackpots available via Hajper’s casino products as well as the speed with which new customers can register and start playing on the site. The posters also featured text stating that the site was restricted to those aged 18 years or older.

The complainants felt the posters were ‘very’ targeted at young people, with content, design, typography and other features meant to resemble a comic book. The RO invited Cherry subsidiary Hajper Ltd to comment on the complaints but the company apparently opted not to participate in this process.

The RO’s Opinion Board unanimously concluded that the posters’ comic book format was “such that it can be assumed that children or young people notice and can be affected by it.” The RO further noted that the posters’ presence in the subway meant that it would be observed by both adults and children, a fact that wasn’t mitigated by the ‘must be 18’ text accompanying the imagery.

The RO ruled that the Hajper ad contravened the Gaming Act’s requirement that gambling advertising cannot specifically target children or anyone under 18 years of age. It’s unclear what punishment (if any) Cherry might face as a result of this ruling.

Cherry hasn’t had the smoothest of rides in Sweden’s new regulated market, with three of its brands having been penalized in August for accepting sports wagers on matches involving athletes under 18. Earlier this month, Cherry lost an appeal of the Spelinspektionen regulatory body’s decision to issue Cherry a two-year license rather than the standard five-year term, which was reportedly due to the regulator’s “uncertainty about the organization.”

Sweden’s requirement for its gambling licensees to exercise ‘moderation’ in their marketing efforts is currently under review in a local court in a case involving Global Gaming Ltd’s Ninja Casino brand. As luck would have it, that case also involved transit posters and featured the Ninja brand’s cartoon-like mascot. The outcome of this case is primarily of interest to other Swedish licensees, as Global Gaming’s local license was revoked in June for social responsibility shortcomings.