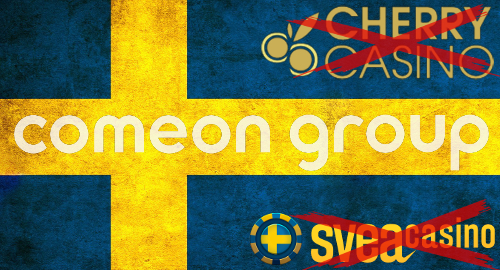 This week, ComeOn informed its marketing affiliate partners that it had “decided to close down operations” of its Sveacasino.com and Cherrycasino.com brands “in Sweden only.” The company said it had “relinquished” the licenses issued by Sweden’s Spelinspektionen regulatory body for these brands.

The two sites have already stopped accepting new customers and deposits, while “all existing Swedish player accounts” on these sites will be closed as of May 18. The company suggested that Swedish players on the two sites check out its ComeOn site, one of many brands still operated by the ComeOn/Cherry family in Sweden, including Hajper, Snabbare and Mobilautomaten.

Spelinspektionen has yet to update its list of online licensees to reflect ComeOn’s reduced footprint, but the regulator announced Thursday that it had issued a new online gambling license to Alea Ltd, which plans to operate in Sweden using its Slottsmillion brand.

ComeOn Group CEO Lahcene Merzoug was one of seven online gambling chief execs who added their names this week to a public letter urging Social Security Minister Ardalan Shekarabi to back off plans to impose new weekly limits on deposits and bonuses. The government says the plans are intended to minimize problem gambling activity during the COVID-19 pandemic but operators claim it will only drive customers toward internationally licensed online alternatives.

The Cherry/ComeOn brands haven’t had the easiest ride in Sweden since the regulated online gambling market launched in January 2019. For starters, Cherry’s brands were issued licenses of a two-year duration, rather than the standard five-year terms due to “uncertainty about the organization.” Cherry appealed this decision to an administrative court but the appeal was rejected last October.

That same month, Sweden’s advertising ombudsman upheld a complaint against the Hajper brand regarding the use of its cartoon superhero mascot on a publicly viewable subway poster. Hajper, Snabbare and ComeOn were also penalized by Spelinspektionen last August for offering betting markets on sports events involving players under 19 years of age.

Cherry remains the biggest advertising spender among Sweden’s licensed operators, despite having dramatically reduced its ad spending in recent months.