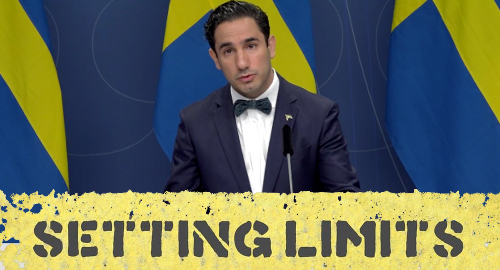 Sweden’s gamblers are facing tough new limits on their activity after the government proposed temporary rules in response to the COVID-19 pandemic.

On Thursday, Sweden’s Social Security Minister Ardalan Shekarabi unveiled a set of proposals to limit gamblers’ possible exposure to harm during the pandemic. The proposals will be up for public discussion until May 7 and Shekarabi (pictured) hopes they will take force on June 1 with an expiration date at the end of 2020.

The proposals include a weekly gambling deposit limit of SEK5k (US$500) with a corresponding loss limit for “gaming on vending machines.” It will be mandatory for players to set time limits for gambling with online casino products and vending machines, and bonus offers will be limited to SEK100.

Shekarabi, who warned earlier this month that a corona-crackdown was in the works, said the new rules were necessary because some Swedish online gambling licensees are reporting “strong progress” in online casino activity – “one of the most risky forms of gambling” – due to the current lack of major sports events on which to wager.

Shekarabi added that this increased online casino activity was occurring at a time when Swedes face “increased risk of unemployment, sick leave and financial uncertainty,” a dangerous mix that compels the government to “act quickly to protect Swedish consumers.”

The Spelinspektionen gambling regulator will be required to submit monthly reports to the government detailing market developments, take steps to “significantly” increase public awareness of the Spelpaus self-exclusion registry and propose other measures to strengthen protection of consumers who set gambling limits.

Spelinspektionen is also tasked with strengthening supervision of unauthorized gambling operators, including internationally licensed gambling sites that serve Swedish customers without the regulator’s permission. Spelinspektionen may be granted “additional tools the authority needs” to prevent these international rogues from accessing the local market.

The European Gaming & Betting Association (EGBA) issued a statement saying the new restrictions “could do more harm to consumer protection than actually provide help to those who might need it.” The new curbs “are not targeted, but could rather encourage customers to play with” internationally licensed sites over which Sweden has no authority (and which customers are already looking for).

EGBA boss Maarten Haijer noted that Sweden’s gambling advertising spending was on the decline and the EGBA had yet to see “evidence that average customer spend is up.” Haijer also claimed there was “no compelling evidence that arbitrary restrictions on customer spend have a positive effect on safer gambling,” although studies have shown that spending/deposit limits can help the highest-spending problem gamblers.