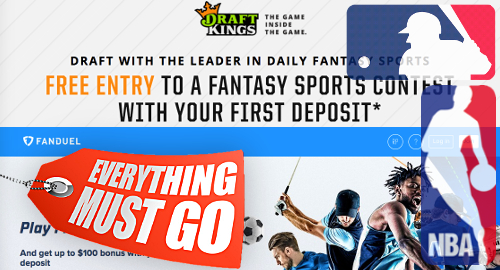 On Thursday, ESPN reported that Major League Baseball and the National Basketball Association were in talks to unload their ownership stakes in DraftKings and FanDuel, respectively. It’s unknown how advanced these talks are or what type of payday the leagues are expecting.

The leagues and DFS operators insisted that the sell-offs weren’t acrimonious and that the parties would continue to work together to boost fan engagement and the like.

NBA spokesman Mike Bass said FanDuel has been a “great partner” but “the space is evolving and we saw the need to take a fresh look at the structure of our relationship.” MLB issued a statement obliquely referencing “potential changes to the structure of our relationship” with DraftKings, while insisting it would continue its “valued partnership” with the league’s official DFS operator.

Ironically, the news came on the same day that the Formula One global motorsport series announced it had taken a stake in Dublin-based fantasy operator PlayON, which is now the series’ official daily fantasy partner. (The site is already offering two new fantasy Formula One games, and plans to enter the US market later this year.) PlayON is the NBA’s official international DFS partner.

MLB took its initial ownership stake in DraftKings in 2013, while the NBA bit off a chunk of FanDuel the following year. In other words, back when the concept of legal sports betting across the United States seemed like a pipe dream, not something that the Supreme Court could bring about any day now.

In recent months, the two leagues teamed up to actively lobby against state-level sports betting initiatives that don’t offer them certain perks, such as a cut of betting handle, mandatory use of league-supplied sports data and final say over what types of exotic wagers are permitted.

In MLB’s case, the recent high-profile efforts by DraftKings to position itself as a full-fledged sports betting operator meant that the league was looking at being an active partner in an operation taking wagers on its games – an activity that the league formerly claimed would cause irrevocable damage to its reputation (before it decided that reputational damage could be offset by cold hard cash).

The two leagues somehow managed to endure previous criticism that DFS was a form of sports gambling without feeling the need to forego their cut of these operators’ revenue. But with MLB and NBA lobbyists now fixtures at state-level sports betting legislative hearings, the hypocrisy may have been undercutting their ‘give us cash or integrity will die’ arguments.