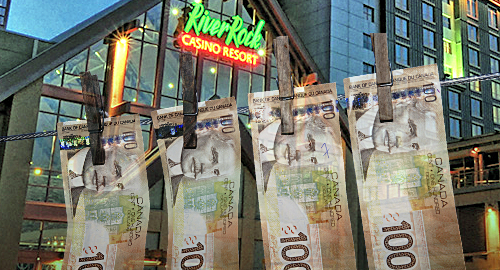 On Tuesday, BC Attorney General David Eby released the first two interim recommendations of Peter German, a former RCMP deputy commissioner who was tasked in September with conducting a review of BC’s scandal-plagued casino industry.

The first recommendation is that BC’s gaming service providers (GSP) – the private operators to whom the British Columbia Lottery Corporation (BCLC) farms out day-to-day management of its casinos – will have to complete Source of Funds Declarations for all cash deposits or bearer bonds of $10k or higher.

Two consecutive cash transactions by any one customer will prohibit the GSP from accepting further cash deposits from that customer unless the GSP can determine that the cash “is not of a suspicious or illegal nature.”

Second, a Gaming Policy Enforcement Branch (GPEB) staffer will be on hand at “large, high-volume facilities” and accessible 24/7 by GSPs to ensure “increased vigilance” over “source of funds, third-party cash drops” and other issues.

German’s review is ongoing and his final report won’t be delivered to the province’s new NDP government until March 31, 2018. But Eby said German’s first two recommendations would be “not only implemented as soon as possible, but enforced on the ground.”

BC’s gaming industry has been under a cloud of controversy for years due to the previous Liberal government’s lack of interest in taking any action that might interfere with one of its primary revenue sources. But the issue exploded this summer after the Liberals were pushed out of office after 15 years and the NDP uncovered a damning GPEB report that had been buried by the Liberals.

Much of the current controversy revolves around the River Rock Casino Resort in Richmond, which is operated by Great Canadian Gaming Corp. The GPEB report noted that Chinese VIP gamblers were suspected of laundering millions of dollars of suspect cash through River Rock with little to no questions being asked.

THE ‘VANCOUVER MODEL’ OF MONEY LAUNDERING
On Monday, Eby shed more light on BC casinos’ connections to Chinese underground banks, and a method of laundering cash Eby claimed was so notorious that it was referred to worldwide as “the Vancouver model.”

BCLC recently updated its operational services agreement with its GSPs, and Eby told the Globe & Mail that the agreement allowed BCLC to suspend commission payments to GSPs if it finds them “substantially out of compliance.” Eby said “tying penalties to the commissions is a way to get [GSPs’] attention” as BC attempts to “transition to a higher level of enforcement.”

Eby caustically noted that, before the Liberals were dethroned, there was “a lack of political will to deal with this issue in any kind of significant way.” Eby acknowledged that the new rules could negatively impact the province’s gambling revenue, but said he doesn’t see “any way around it.”

Eby’s intentions are undoubtedly honorable, but the inherent contradictions of Canada’s provincial gambling monopolies acting as both gaming regulator and operator mean that, even with these new recommendations, this is still akin to trusting an alcoholic janitor to lock up for the night after he’s done mopping the liquor store floor.

The new NDP government is already facing some financial headwinds and, should BCLC’s contributions to the provincial coffers suffer too great a decline under these new recommendations, the temptation to ease up on the regulatory throttle could prove too great to bear.