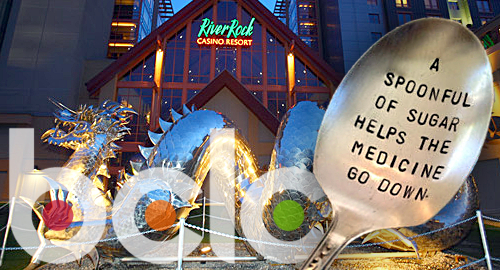 British Columbia’s self-regulated gambling monopoly is giving itself new powers to curb rampant money laundering at the land-based casinos it was already supposed to be regulating.

On Thursday, the British Columbia Lottery Corporation (BCLC) announced that it was updating its operational services agreement (OSA) for casino and community gaming services. Among other things, the new 20-year OSA aims to strengthen BCLC’s “oversight in the areas of compliance and security including escalation mechanisms and progressive discipline measures.”

BCLC came in for a torrent of criticism a couple months back, following a change in provincial leadership that uncovered a year-old report that had been buried by the former Liberal government.

The report contained details of stupendous indifference to anti-money laundering practices at BC casinos, particularly the River Rock Casino Resort in Richmond, where Asian VIPs with questionable funding sources were able to buy millions of dollars in casino chips with gym bags full of 20-dollar bills.

BCLC president Jim Lightbody said the new OSA would “hold service providers accountable … for maintaining the security and integrity of gaming.” Of course, that depends on whether the current BC government will behave like the Liberals, who shut down the province’s illegal gambling taskforce when it asked the wrong questions about casino transactions.

Attorney General David Eby, who made public the Liberals’ damning report, certainly appears confident that there’s a new sheriff in town. Eby claimed to be “very happy” that the new OSA would “increase the ability of [BCLC], and by extension government, to enforce these policies.”

Oddly, BCLC’s press release regarding the new OSA makes no mention of what penalties casino operators might face for falling short on their compliance obligations. The release does go into great detail regarding the new commission structure for the private companies to which BCLC farms out day-to-day management of the province’s casino operations, like Great Canadian Gaming Corporation, which manages River Rock and insists it followed all requirements laid down by BCLC.

The new OSA maintains the old deal’s 25% commission on slots revenue, while upping the commission on poker table revenue by 2.5 points to 77.5%. Regular limit table games also get a 2.5-point bump to 42.5%, while the commission on VIP table games – on which BC’s casino industry relies for most of its revenue – will remain at its current 40%. (Take that, lax AML practitioners!) Bingo commissions are also in line for a serious boost.

ONTARIO LOOKING FOR SPORTS BETTING HELP
In other provincial gambling monopoly news, the Ontario Lottery & Gaming Corporation (OLG) has issued a request for proposals to select a service provider to “enhance and expand sports betting” in the province.

Like other provincial monopolies, Canadian law prohibits OLG from offering single-game sports betting, limiting OLG to parlay sports wagers via its Pro-Line sports betting product. The most recent attempt to okay single-game wagering went down to defeat in the House of Commons in September 2016.

OLG says its new betting provider will have to be able to deliver an omni-channel product that works at the retail level, as well as online and mobile products. OLG says it expects to designate its new sports betting service provider by “fall 2018.”