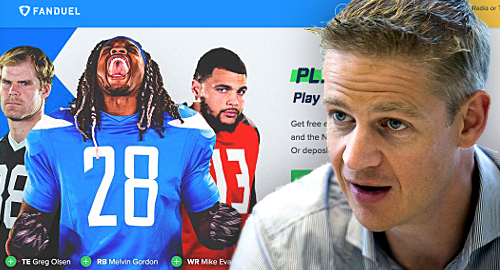 Daily fantasy sports operator FanDuel has a new chief exec after co-founder Nigel Eccles announced his intention to ride off into the sunset.

On Monday, FanDuel confirmed a long-percolating rumor that Eccles was leaving the company he co-founded in 2009 to “focus on his next venture.” FanDuel’s former chief financial officer, Matt King, has returned to the fold and stepped into Eccles’ CEO shoes effective immediately.

Eccles had kind words for King, saying he couldn’t imagine “a better individual to steer FanDuel forward.” King called it “an incredible honor” to be welcomed back to the company, and hailed Eccles for having “built one of the most disruptive companies in the sports world.”

The 42-year-old Eccles offered further details via his Twitter feed, saying he was “excited but a little sad” to be leaving his baby after “an amazing 8 years.” Eccles also offered more insight into the scope of his next venture, saying he was “building something awesome in eSports.”

Eccles made DFS into something from nothing, so maybe he’s the man to turn the eSports betting industry – which is currently more smoke than fire, with the exception of a few early adopters such as Pinnacle – into more of a legitimate presence on the gambling scene.

Under Eccles’ leadership, FanDuel blazed the trail for DFS in America, inking the first DFS deal with a major US newspaper’s website in early 2010. The ensuing years saw DFS explode in popularity and new entrants join the fray, including DraftKings, which ultimately usurped FanDuel in terms of business volume.

But the high-profile growth of DFS brought down the regulatory hammer, leading to DFS being banned in some US states and deceptive marketing lawsuits filed by some state attorneys-general. Both FanDuel and DraftKings, neither of which has yet to turn a profit, saw their revenues shrink and their legal expenses soar.

These changes led to both companies posting significant annual losses, which led auditors to question FanDuel’s ability to carry on a going concern. The companies decided a merger was the only logical way forward, but this plan was thwarted when US regulators raised anti-competitive concerns.

Eccles was to serve as chairman of the merged DFS giant, with the CEO gig going to DraftKings CEO Jason Robins. Instead, Eccles found himself back in the CEO’s chair at his old company, which apparently didn’t fit with Eccles’ new life-plan.

Having streamlined its operations and resolved legal issues in a number of US states, FanDuel now insists that it’s on target to turn a profit in Q4 2017 and expects to turn an annual profit in 2018.