Home / Business / DraftKings, FanDuel pay $2.6m to get Massachusetts off their backs 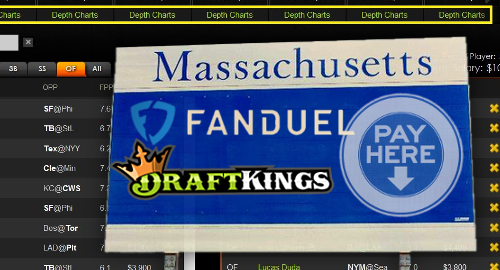 Daily fantasy sports operators DraftKings and FanDuel have agreed to pay $2.6m to resolve allegations of consumer-unfriendly practices in the state of Massachusetts.

On Thursday – just hours before the kickoff of a new National Football League season – Massachusetts Attorney General Maura Healey announced that the state had reached a deal that will see each DFS operator pay $1.3m “to address various consumer issues that existed at the early stages of this new industry.”

Healey began looking hard at the DFS industry in late 2015, which by then had become embroiled in a frenzy of negative media attention. Shortly thereafter, Healey proposed a raft of consumer protection regulations, including advertising that reflected the average DFS player’s slim chances of winning anything.

Healey’s proposals have gone on to become the template for many of the 16 US states that have formally authorized DFS within their borders (including Massachusetts, DraftKings’ home state, which joined the club in August 2016).

New York formally approved DFS operations in August 2016 but this law was challenged in court just weeks after Gov. Andrew Cuomo signed the bill into law. The Debbie Downers at Stop Predatory Gambling argued that legislators had erred by simply declaring DFS exempt from gambling prohibitions rather than taking the infinitely more torturous route of amending the state constitution.

As reported by New York Appeals, this week saw Albany County Judge Gerald Connolly deny the state’s motion to dismiss the lawsuit, clearing the way for the parties to file detailed briefs with the court. Ironically, the state is represented in this matter by Attorney General Eric Schneiderman, who led the charge to keep DFS out of New York until legislators gave it their stamp of approval.