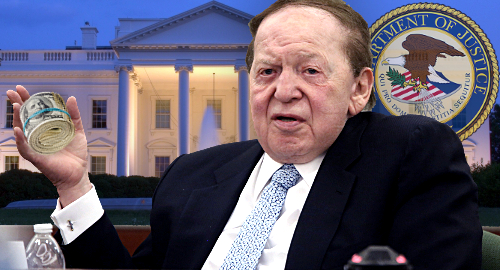 Anti-online gambling advocate Sheldon Adelson cut a $5m check to US President Donald Trump’s inauguration fund, so can a quid pro quo on banning online gambling be far behind?

On Tuesday, a Federal Election Commission filing revealed that the Las Vegas Sands casino owner and anti-online gambling curmudgeon had contributed $5m to Trump’s coming out party in Washington this January. Adelson’s contribution accounted for nearly 5% of the record $107m the inauguration fund collected from wealthy donors.

(For the record, it’s unclear how much of that $107m was actually spent on the inauguration. The New York Times quoted the inaugural committee saying any leftover funds would be donated to charity, although these charities have yet to be identified, which likely means that the much-maligned Donald J. Trump Foundation will soon have more money to pay the lawyers defending the president’s many lawsuits.)

Adelson’s largesse followed the $11.2m that he and his wife Miriam reportedly gave Trump and Trump-affiliated political action committees during the 2016 election cycle, not to mention Adelson’s $20m gift to the Republican Senate Leadership Fund last September.

Adelson’s quid pro quo for the Senate contribution was the introduction just days later of a fresh version of his Restoration of America’s Wire Act (RAWA), which seeks to scrap state efforts to roll out intrastate online markets by asserting federal control over online gambling. So what does Adelson expect from his $5m Trump party favor?

Rumors have been swirling in recent weeks that Jeff Sessions, Trump’s new head of the Department of Justice, is preparing to announce plans to reverse the 2011 DOJ opinion that the 1961 Wire Act applies only to online sports betting. During his confirmation hearings in January, Sessions expressed a willingness to “revisit” the opinion, which paved the way for states to launch their own online lottery, poker and casino markets.

Reversing the 2011 opinion would prove a simpler matter than passing Adelson’s cherished RAWA, which has received harsh pushback from the GOP’s more libertarian wing, who see RAWA as an unwarranted federal attack on states’ rights.

This month saw the National Governors Association write a letter to Sessions to express their firm view that “states are best equipped to regulate and enforce online gaming.” Just this week, former GOP Congressman Lynn Westmoreland penned an op-ed in The Hill calling RAWA “the most dangerous kind of lawmaking effort in D.C.”

Meanwhile, Adelson’s stable of reliable RAWA supporters in Congress got a little smaller on Wednesday after Rep. Jason Chaffetz’s surprise announcement that he won’t seek re-election in 2018. The Utah Republican, whose fact-free championing of Adelson’s anti-online talking points has been publicly called out by other GOP stalwarts, said he wasn’t ruling out a future run for a different public office. Given Chaffetz’s willingness to spew garbage, perhaps Salt Lake City is in line for a new waste recycling manager.