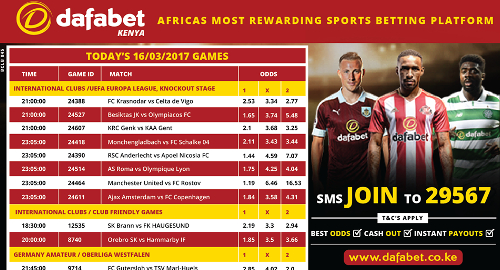 Asian-focused online sports betting operator Dafabet has opened an office in Kenya’s capital Nairobi from which the company hopes to expand across the African continent.

This week, the Philippines-licensed Dafabet officially launched its Kenyan sports betting service, which will offer local punters the ability to wager on a variety of international sporting events and daily live greyhound racing from the UK. Dafabet’s Kenyan customers can wager via the Dafabet.co.ke website, a new mobile betting app as well as SMS text messaging.

Dafabet’s Kenyan market interest was made public in January when the company registered the @DafabetKenya Twitter handle. Louis Watts, director of retail and regional operations for Dafabet Kenya, told Business Daily Africa that putting down roots in Kenya was a necessary precursor to the company’s plan to launch operations in other African countries.

Watts called the Kenyan betting market “mature and respected due to its sports betting savvy” and it will give Dafabet a “stable base from which to grow” its African presence. Other operators currently making waves in Kenya are domestic operator Sportpesa, as well as Betway, Betin and Elitebet.

Kenya is in the process of amending its gambling and betting regulatory environment but progress to date has been anything but smooth. The Betting, Lotteries and Gaming (Amendment) Bill 2016 has been slammed by pretty much everyone except its author, MP Jakoyo Midiyo, based on the bill’s high tax rates, restrictions on the types of gambling permitted and curbs on foreign ownership of betting firms.

If nothing else, Dafabet’s Kenyan launch is a welcome change in tone from the headlines the company made earlier this week when Vietnamese authorities sentenced 64 members of a Dafabet-linked illegal online betting ring.

Dafabet had teased its Kenyan launch in recent weeks via a number of promo videos, including one featuring the members of comedy troupe Propesa decked out in kit of the Dafabet-sponsored Celtic FC and Sunderland AFC.