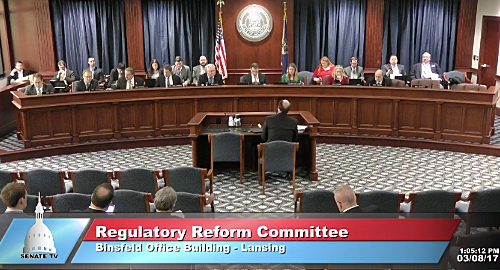 Michigan’s latest online gambling bill is headed for the state senate floor after a committee overwhelmingly approved the measure.

The hearing preceding Wednesday’s vote lasted around 70 minutes, a mercifully brief affair following Tuesday’s online gambling hearing in Pennsylvania, which clocked in at over four hours. It helped that Kowall was the only speaker who faced any questions from the committee, a lack of curiosity that also featured large in the same committee’s 2016 hearing on Kowall’s previous gambling bill.

There was also an appearance by a different rent-a-lobbyist representing the Sheldon Adelson-funded Coalition to Stop Internet Gambling, who delivered the same alarmist talking points about the uncertain future of online gambling under the Trump administration.

The chief difference between Michigan and Pennsylvania’s hearings was the uncertainty over the state’s tribal gaming operators. While Kowall claimed that he’d conducted “multiple work groups” with stakeholders, much of his testimony featured on the various legal triggers that could unravel the state’s compacts with its gaming tribes.

Michigan Gaming Control Board deputy director David Murley later spelled it out for the committee, noting that federal law prohibits states from taxing gaming tribes. States are only permitted to collect money above and beyond the cost of regulating gaming if the state grants the tribes meaningful concessions, such as exclusivity over a particular gaming product or over a geographical area.

Murley noted that many of the state’s 12 gaming tribes had already ceased to honor their compacts’ financial obligations based on their belief that the state has violated the agreements in various ways, such as authorizing commercial casinos to operate in Detroit or by allowing the state lottery to launch online. Murley said that each tribe will ultimately decide for itself if online gambling violates their individual compacts.

While no tribe or commercial casino operator appeared at the hearing, the three commercial operators all sent notices expressing neutral positions on SB 203, while four gaming tribes expressed opposition.

Wednesday’s lone ‘nay’ vote came via Sen. Peter MacGregor, who expressed three concerns: disbelief over Kowall’s claim that 22k jobs would be created via online gambling approval, whether ‘bad actors’ would be allowed to act as online technology providers for the state’s casinos, and protecting youth. On the latter concern, MacGregor claimed, without citing evidence, that geolocation technology could be “easily fudged.”

The day’s most humorous note came when Kowall emphasized that online gambling was already going on in the state whether or not the state chose to regulate the activity. Kowall cited an online affiliate that used the University of Michigan’s capital ‘M’ logo to spell out Michigan, prompting Sen. Rick Jones to suggest “maybe the M stands for the mafia?” Don’t quit your day job for the comedy stage just yet, Jonesy.