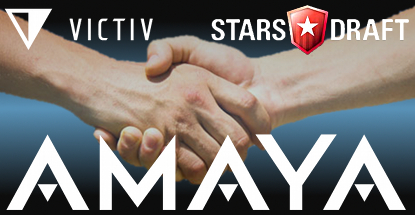 The Austin, Texas-based Victiv, which launched one year ago, has been among the operators vying for the title of third-largest DFS site behind DraftKings and FanDuel. The operation will be rebranded as StarsDraft – a Russian site launched under this brand in 2013 – and reborn at the StarsDraft.com domain in select US markets, with a full launch later through Amaya’s PokerStars’ platform.

The team currently managing Victiv will continue to hold the fort, including CEO Matthew Primeaux, who said the plan was to “capitalize on what we believe is strong crossover between online poker players” and DFS. Primeaux formerly served as an exec with online poker affiliate PokerStrategy.

Terms of the deal weren’t disclosed, but Amaya CEO David Baazov said the cost was “immaterial.” The rebrand will occur before the NFL season kicks off and Baazov said the launch would allows Stars to “re-engage” with its US customer database, which hasn’t been updated since Stars left the US market following the April 15, 2011 ‘Black Friday’ indictments. This marks the first entry of a pure real-money online gambling firm into the US DFS market, which could influence how legislators and regulators view the sector. Watch this space…

Amaya won’t initially spend much on marketing its new DFS product, based on Baazov’s view that the US market needed to “significantly” mature. Baazov said he didn’t want to mimic the market leaders by spending 4x to 5x revenue on marketing and relying on overlays to attract customers. Instead, Amaya intends to capture a “meaningful” slice of the DFS pie by relying on the Stars’ brand and trust to cross-sell its database.

AMAYA MOBILE CASINO LAUNCH IMMINENT
Amaya also released its second quarter numbers, which were largely in line with last month’s earnings preview. Revenue rose 10% to C$320m (US $246m) – up 24% if you factor out currency exchange fluctuations and the $6m in new European Union value added taxes. Around $250m of Amaya’s revenue came via European markets. Adjusted earnings rose 24% to $138m while earnings margins improved to 43.5% from 38.9%. Adjusted net earnings rose 43% to $86m.

The new online casino offering on Stars and Amaya’s ‘B’ brand Full Tilt accounted for 11% of total revenue, with the rest coming from the sites’ core poker product. Customer ranks swelled by 1.9m to 95m, of which 5.7m were active during Q2. Unique customers who played for real money were flat at 2.3m, of which 95% were active on Stars. Customer deposits rose 4% on a constant currency basis, although no figures were provided for actual deposit levels.

Baazov noted that Amaya had yet to spend “one dollar” in marketing its new casino or sportsbook verticals but casino had “exceeded our expectations simply by turning it on,” with casino yield per player twice that of poker. A full casino marketing push will ramp up towards the end of this year and into 2016 and a mobile casino launch was expected within the next two weeks.

Amaya has repaid US$529m of long-term debt since shelling out $4.9b for Stars and Tilt last August. Around $344m of this repayment came via Amaya’s post-acquisition divestiture of its B2B assets, meaning debt payment gets harder from hereon in. Amaya refinanced some of its debt last month, which the company says reduced its annual interest by around $62m. Amaya’s total long-term debt stood at $5.3b as of June 30.

BAAZOV “VERY OPTIMISTIC” RE RUSSIAN ONLINE POKER REGULATION
A further $400m in deferred compensation to the former owners of the Rational Group is payable on February 1, 2017. This payment will increase to $550m if Russia finally regulates its online poker market and Amaya is issued a Russian license under a tax regime both parties consider “beneficial.” Conversely, this sum will decrease by $100m if Russia makes online poker explicitly illegal.

Baazov said the Russian market was “not close to saturation” and he was “very optimistic” on the country’s regulatory progress. Baazov also claimed Germany was showing “positive advancements” regarding regulation. Regarding Asian expansion, Baazov played coy on specific market moves but promised to “talk more openly” on the next quarterly call.

Baazov offered no updates on Stars’ regulatory purgatory in New Jersey, despite having vowed that approval was imminent this quarter. Similarly, Baazov offered no word on California’s apparently stalled path towards online poker regulation.