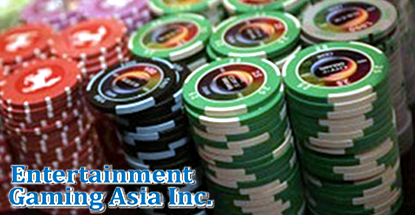 The Nasdaq-listed EGT’s revenue in the three months ending June 30 rose 54% to $7.6m while earnings rose 57% to $3.3m and net income hit $1.5m compared to a $22k loss in the same period last year. It should be noted that Q2 2014 was negatively affected by the loss-making sale of EGT’s underperforming Cambodian casino Dreamworld Pailin last June.

Most of this quarter’s revenue uptick came courtesy of EGT’s gaming products division, which reported sales of $2.7m compared to just $524k in Q2 2014, thanks to significant reorders of casino chips and plaques from existing customers.

EGT’s gaming division reported revenue up 11% to $4.9m, driven by success at NagaCorp’s NagaWorld casino in Cambodia’s capital Phnom Penh. EGT has revenue-sharing slot machine supply deals with both NagaWorld and the Thansur Bokor Highland Resort in Kampot province. EGT has a similar slots supply deal in the Philippines and also runs its own Dreamworld Poipet slots hall on Cambodia’s border with Thailand. EGT controls about 1,600 slots in the two countries.

Average daily net win in EGT’s Cambodian operations was up 27%, driven by increased VIP player traffic at NagaWorld. In the Philippines, average daily net win fell 14% due to increased competition from new integrated resorts in Manila, including (ironically) Melco Crown’s City of Dreams Manila, which officially opened its doors this spring.

EGT CEO Clarence Chung says the company has over $24m in net cash lying about, just waiting for the right opportunity to expand into new businesses and markets.