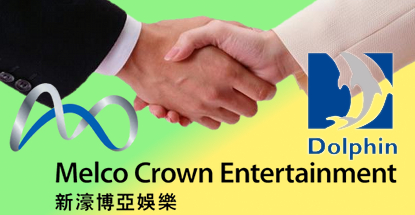 Casino operator Melco Crown Entertainment (MCE) has committed to purchasing $29m of gaming products from Entertainment Gaming Asia (EGT) subsidiary Dolphin Products Ltd. The purchases will be spread out across three years, with $18m in year one, $6m in year two and $5m in the final year ending Dec. 31, 2017. Earlier this year, Dolphin Products inked a pair of deals worth $4m to supply products to MCE and to Philippine casino operator Bloomberry Resorts.

The MCE joint venture is two-thirds owned by Hong Kong’s Melco International Development, which recently acquired majority control of EGT. In addition to its gaming products division, EGT supplies electronic gaming machines to NagaCorp’s NagaWorld in Phnom Penh, the Dreamworld Poipet slots hall on Cambodia’s border with Thailand and to various small-scale properties in the Philippines.

On Monday, it was announced that MCE will be dropped from the Nasdaq Q-50 Index effective Dec. 22. The Q-50 index tracks the performance of companies that are vying to be included in the ritzier Nasdaq-100 Index. MCE’s stock has declined 40% this year as the ongoing gaming revenue decline in Macau caused investors to run for the hills.

MCE CEO Lawrence Ho recently opined that Macau’s current struggles are worse than those experienced during the 2009 global economic meltdown. Speaking last week with Sterne Agee analysts, Ho said the 2009 crisis was rescued in part because China’s government was able to “fuel the market with liquidity to establish a relatively speedy consumer recovery.”

This time around, Beijing is driving the decline through its crackdown on corrupt officials and restrictions on the flow of capital. These actions have had a “deep psychological impact” on VIPs, who are “taking a low profile approach to spending “ and whose “state of mind is unlikely to change from any one lever.”

That said, Sterne Agee says Macau casino operators are in much better financial position to weather the current storm than they were in 2009. Sterne Agee also believes Macau is a supply driven market and thus MCE’s new Studio City property will add a badly needed boost to MCE’s bottom line when it opens in Q3 2015.