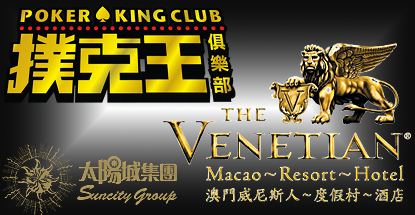 A fixture at Galaxy Entertainment Group’s StarWorld Hotel for the past six years, Poker King had its relocated soft launch in March. The property currently features six cash tables and two additional tables for VIP gamblers but the plan is to eventually expand the offering to 24 tables in order to accommodate tournament play.

Poker King Club is operated by Kings Consulting Ltd., a division of the SunCity Group, one of Macau’s leading junket operators. During Friday’s event, Kings Consulting president Winfred Yu told reporters that Poker King would be “targeting the mass market and our strategy is to cater to the mass with VIP experience, although we also have the intention of targeting VIP players.”

Yu believes Poker King’s new home at the Venetian provided “a better opportunity to grow to serve the poker market.” Yu says poker is becoming increasingly popular in China and that people were “just waiting for the experience of coming to play in a world class tournament.”

Yu told GGRAsia that Macau’s current revenue slump has helped open the door for poker in Macau. The local government keeps a tight lid on the number of gaming tables and the rake generated from poker can’t compete with revenue generated at a baccarat table. But with many casino tables currently underutilized, poker’s ability to bring in players – who may stay to patronize a casino’s clubs, restaurants, shows, etc. – is getting a fresh start.

SunCity recently expanded its junket operations to Manila and part of that expansion included a Poker King Club at Bloomberry Resorts’ Solaire Resort and Casino. SunCity also has dealings in Vietnam, Cambodia, Melbourne, London and other places on the European continent.