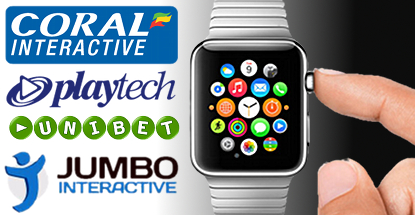 Apple’s hotly anticipated new wearable device made its official debut on Friday, along with over 3k new Watch apps in the App Store. Ladbrokes Australia and William Hill have already staked their claims on punters’ wrists and more companies are rushing to take advantage of the new device’s early adopters.

Online gambling software outfit Playtech has developed its own Apple Watch product, which has now been released by Coral interactive as part of its Coral Connect omni-channel deal with Playtech. The app allows users to place wagers from a selection of live and future sporting events and to cash out their live bets. Playtech says it’s working with a number of other licensees looking to release their own branded versions of the product.

Unibet’s product is a bit more limited, providing only information on football matches and horseracing events. Punters looking to actually place a bet will have to switch over to their mobile. Ed Nicholson, Unibet’s head of UK sportsbook marketing, said the company anticipates Apple Watch users “initially using their watch as an information and communication tool, weeding out the wheat from the chaff of all the communication that reaches our smartphones these days.”

Australian online lottery operator Jumbo Interactive attempted to beat everyone to the punch by announcing its Apple Watch app at the end of March. The app sends alerts regarding prizes and winning numbers while allowing players to manage ticket purchases from their new digital toy. Jumbo CEO Mike Veverka observed that “there are things you want to be told about immediately and winning the lottery is certainly one of them.”