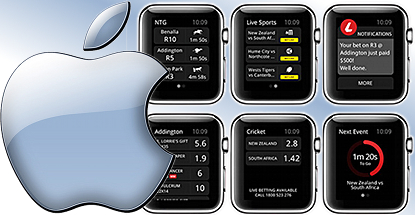 The new Apple Watch wearable device won’t even begin shipping until April 24 but gambling operators are already lining up to ensure customers have the option of wagering via their new toy.

The Aussie division of UK-listed betting operator Ladbrokes is claiming to be the first bookie to receive Apple’s approval of a new Apple Watch betting app (pictured). Ladbrokes Australia chief information officer Scott Hutchens told Horseracing.com.au that the Apple Watch extension “communicates with the main Ladbrokes iOS app and will enable customers to actually bet directly from their wrist.”

Hutchens said mobile wagering accounted for more than 50% of total betting turnover, “with the phone the primary device.” But Hutchens insisted the Apple Watch app was “more than just novelty … It is unprecedented design and the simplest betting interface in the world.” Ladbrokes Australia’s boffins reportedly churned out the Apple Watch app in less than a month.

Real-money gambling outfits aren’t alone in exploring the potential of the Apple Watch. This week saw California-based mobile game publishers PlayScreen release Blackjack Anywhere for the new device (demo viewable below). PlayScreen chief creative officer William Volk told GamesBeat that blackjack’s simplicity was perfect for the miniscule screen on the Apple Watch, which reminded him of the screens on old Nokia phones.

Blackjack Anywhere allows players to see four cards at once. A tap on a button or a swipe of the touchscreen in one direction allows a player to hit, while swiping in the other direction will stand pat. Further controls are accessible via the rotary knob on the side of the watch and the game includes sound effects to enhance the experience. Volk says PlayScreen is already working on a second app for the Apple Watch.