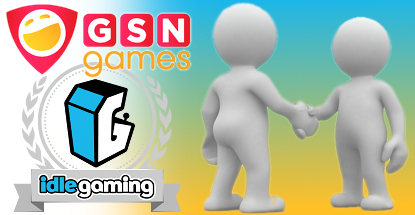 On Monday, GSN announced it had acquired the San Francisco-based Idle Gaming, which counts Fresh Deck Poker, Slots of Fun and Video Pour Tour among its titles. Terms of the deal were not disclosed.

In other GSN news, Tuesday saw the announcement of a new nationally syndicated game show, Monopoly Millionaires’ Club. The show combines the classic board game with the multi-state lottery of the same name, and features lottery winners who have won a trip to Las Vegas to appear on the show. The show, hosted by Mike & Molly actor Billy Gardell and taped at Caesars Entertainment’s Rio Hotel & Casino, premieres Tuesday night at 8PM ET.

Meanwhile, a new social casino outfit is looking to poach Zynga Poker players. PlayScreen, the folks behind Billionaire Poker, are offering to double Zynga players’ chip stacks if they make the switch to PlayScreen’s product. All players have to do is take a screenshot of their Zynga Poker game and PlayScreen will deposit double the number of chips into their Billionaire Poker account. PlayScreen’s app is available via Apple’s App Store.