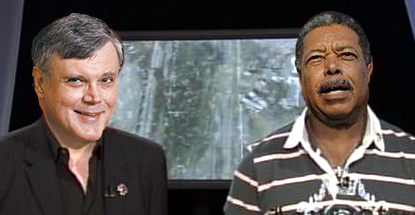 Anti-gambling jeremiads were definitely in vogue on Thursday. First up was the reliably batty former University of Illinois professor John Kindt (pictured on the left), who gave an interview to Newsroom America about the evils of sports betting. The interview was published on the 13th anniversary of the 9/11 terror attacks, which is highly appropriate, given that Kindt believes Al Qaeda was funding its terror operations via hands of online poker.

Asked about NBA commissioner Adam Silver’s recent comments that the spread of legal sports betting across the US of A was ‘inevitable,” Kindt said Silver’s view was “equivalent to opening Pandora’s box.” Kindt found it “especially disheartening” that Silver was “encouraging people to commit a federal crime,” outside of the fact that Silver was merely future surfing, not inviting people to steal their kids’ piggybanks and go find the local back-of-the-bar bookie.

Kindt rubbished Silver’s claims that the UK’s longstanding legal sports betting market allowed rational adults to have a “gentleman’s bet.” Kindt argued that it was “a slippery slope” from gentlemanly wagering to “full-blown gambling.” Kindt said this slope “gets even slipperier and steeper when you introduce smartphones into the equation.” Kindt conveniently ignores the UK’s most recent Health Survey, which showed the number of problem gamblers had almost halved since 2010, a period in which smartphone use has exploded.

Kindt went on to describe sports betting as “the gateway drug” of gambling and said the pro sports leagues’ embrace of fantasy sports was intended to get people “used to the idea of taking risks in the context of professional sports.” We like to think Kindt then raced off to join Jenny McCarthy at an anti-vaxxer conference, where he warned that the International Communist Conspiracy™ was out to sap and impurify the nation’s precious bodily fluids.

Webb’s op-ed has the same goal as those penned by the CSIG’s other rented guns: to push Congress to pass Adelson-penned federal online gambling prohibition bills. But unlike previous CSIG campaigns, which suggested online gambling firms were hanging around elementary schools handing out candy, Webb’s op-ed takes a different tack. Playing off his status as Denver’s first African-American mayor, Webb claims African-Americans are particularly at risk to the evils of online gambling.

Webb reminds everyone that the US Department of Justice was responding to a query by two state lotteries when it issued its late-2011 opinion that the Wire Act applied purely to online sports betting. Webb then cites University of Buffalo stats that show lotteries draw most of their revenue from players on the lower rungs of the socio-economic ladder. Given that African-Americans are disproportionately represented among the ranks of the economically unfortunate, Webb concludes that African-Americans are more likely to play the lottery.

Webb then cites Pew Internet Research data that says African-Americans are more likely than whites to (a) own smartphones and (b) to rely on these phones for more than just making calls. By Webb’s calculations, this makes African-Americans “uniquely susceptible to the threat” of online gambling.

Hate to burst Webb’s bubble, but Statistics Canada studies have found that online gamblers were six times more likely to be high-income earners than those with the lowest earning potential, which suggests that low-income African-American smartphone users are actually less likely to be going online to get their lottery fix. So perhaps Webb ought to be advocating for a shutdown of all lottery retailers, that is, provided he can find an aging billionaire with an axe to grind against Kwik-E-Mart.