Home / Business / Sheldon Adelson Ploughs $460,000 into the Political Fight Against Online Gambling in the US 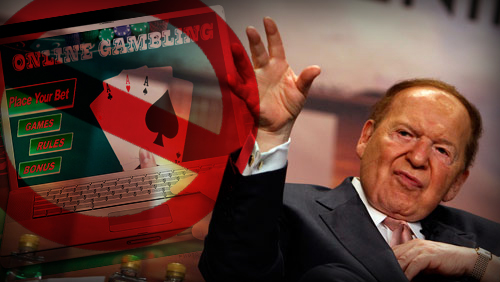 Sheldon Adelson has spent $460,000 on political donations, in the first six months of the year, in a bid to derail the future of online gambling in the United States.

If you are a poker player, and your cross hairs are not facing this man, you should start questioning your choices very seriously.

According to figures pulled from OpenSecrets.org. In the first six months of 2014, the Las Vegas Sands CEO, Sheldon Adelson, and his associates, have spent $460,000 on political handouts designed to ease the flow of the Restoration of America’s Wire Act; a bill opposing online gambling, that was introduced back in March by Sen. Lindsey Graham and Rep. Jason Chaffetz.

To put that figure into perspective it’s just $10k shy of the total amount that he spent lobbying throughout the whole of 2008, which remains his biggest annual spend to date.

The owner of the largest casino company in the world (I know the hypocrisy still stings) has been allowed to loosen his purse strings courtesy of a decision made by the Supreme Court, in McCutcheon v Federal Election Commission, which struck down aggregates limits on how much a billionaire can hand over to candidates, political parties and PACS.

When you are a billionaire; are used to getting what you want, and close to death anyway, then it’s safe to say that Sheldon Adelson is going to occupy the button as we play each and every street.

It’s not just Adelson who is emptying his pockets. The whole family is at it. His wife Miriam, his daughter Shelley, and his step daughter and husband Yasmin and Oren Lukatz are all handing out cash to the likes of the National Republican Congressional Committee and the Republican National Committee.

So what can you do about this?

My fingers are becoming bored with typing the same monotonous drivel, but just stay away from his facilities. Do not donate the next million that will be used to keep us away from the game that we love.

Players still head to the Venetian in their droves, but fortunately the casinos have decided to put on their boxing gloves and climb into the ring for a good old fashioned punch up.

Adelson may be fighting to stop the cancer from coming, but not everyone shares his views. Caesars Entertainment spent $980,000, in the second quarter, on varying advocacy issues that include the support of iGaming in the US, and the total bill for the year now stands at $1.8m (just $100k less that the entirety of its bill in 2013).

Churchill Downs Inc. spent $95k lobbying in the second quarter, Boyd Gaming spent £240k and MGM resorts spent $240k. All in opposition of what Adelson stands for. The only big boy to keep a low profile throughout 2014 has been Steve Wynn. The man who has spent time on both sides of the fence, preferring to give George Clooney a left hook rather than publicly get involved in this particular bloodbath.