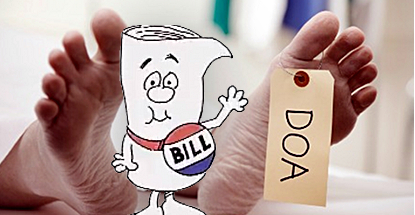 A new federal bill that would ban most forms of online gambling except online poker is currently making the rounds in Washington, DC. Word of the new legislative LOL came courtesy of Nevada journalistic mainstay Jon Ralston, who posted an excerpt from the bill to his Ralston Reports blog. Ralston played coy with the source of the bill, saying only “I smell a Nevada company.”

The Internet Gambling Prohibition and Control Act of 2014 (IGPCA) reads very much like the Sheldon Adelson-backed Restoration of America’s Wire Act (RAWA) that was introduced into both the House and Senate in March (earlier drafts of which were known as the Internet Gambling Control Act). In February, Sen. Dean Heller (R-NV) suggested he and Senate Majority Leader Harry Reid (D-NV) were working on a plan that would allow online poker to skirt Sheldon’s ban-hammer.

Sure enough, IGPCA’s defining feature is that, in addition to the standard horseracing carveout, online poker is deemed sufficiently non-evil to carry on living. Also catching a break are intrastate online lottery sales for draws that occur not more frequently than daily, and ‘licensed facility activities,’ i.e. bets that “occur between or among players who are located on the premises of one or more” casinos.

Like its RAWA counterparts, IGPCA would explicitly ban online casino play, but with online casino games already active in two US states, the question remains: how do you stuff that genie back in the bottle? There are six brick-and-mortar casino operators currently offering online casino play in New Jersey, three of which only offer online casino play. Whose job would it be to compensate these casinos, their technology partners and their host state for shutting down their operations: the federal government or Adelson? (Hint: only the latter can actually afford it.)

It’s probably fitting that the IGCPA acronym is unpronounceable, because it won’t be anything anyone bothers to commit to memory. Regardless of Adelson’s ability to stuff wads of bills in politicians’ pockets, the combination of a do-nothing Congress, a largely disinterested public and the legions lined up against previous attempts to usurp states’ rights will ensure that IGCPA is DOA.