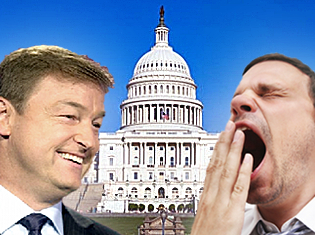 United States Sen. Dean Heller (R-NV) (pictured, not yawning) says federal legislation to prohibit pretty much all online gambling bar poker will likely be introduced by the end of March. In a discussion with the Las Vegas Review-Journal’s editorial board on Thursday, Heller said he believes Las Vegas Sands chairman Sheldon Adelson has brought up “some reasonable concerns” via the all-out assault launched by his Coalition to Stop Internet Gambling.

The bill Heller referred to is a tandem effort with Senate Majority Leader Harry Reid (D-NV), and Heller says there is “no daylight between where Sen. Reid and myself are on this particular issue.” Reid has previously authored federal legislation that would have made Nevada the regulatory hub of a national online poker business. This time around, Heller says he and Reid are “trying to keep it from being just a Nevada issue.” The latest offering represents a split with the many Nevada-based members of the American Gaming Association (AGA) that have adopted a full-throated endorsement of state-level full-spectrum online gambling initiatives.

While Heller suggested online gambling carried some “serious social implications,” he appeared far more concerned by the economic implications when he claimed there would be no incentive for Californians to visit Vegas if they could gamble from the comfort of their living room. In doing so, Heller directly refuted one of the Nevada brick-and-mortar casino industry’s key talking points, namely, that Vegas is an entertainment mecca in which gambling is merely one of many options.

Heller justified a poker exemption from the federal ban based on the tired theory that games like poker “take a little more skill” than other online gambling options, which would ring a lot more true if this Reid/Heller bill also banned online betting on horse races, which it won’t, since the horseracing lobby has made their business the exception to the rule ever since the 1978 passage of the Interstate Horseracing Act.

Virtually no one – probably not even Heller – believes there’s a hope in hell of a federal prohibition against online gambling being passed by Congress. For one thing, Congress officially stopped passing any legislation after the Tea Party wingnuts took over the Republican party in 2010. Secondly, there’s already two states offering online gambling other than poker and a bunch more considering jumping into this pool, meaning the Republican champions of states’ rights would have to do some impressive tongue-twisting to justify that switcheroo.

Bottom line, Heller can say he kissed Adelson’s ring real good, but there’s literally no value for anyone else via this action. In fact, depending on the time zone in which you’re reading this, the only benefit may have been to bore you to the point of exhaustion so that you can get an early night and wake up Friday in time to catch the Olympic semi-final hockey action. You’re welcome. And go Canada.