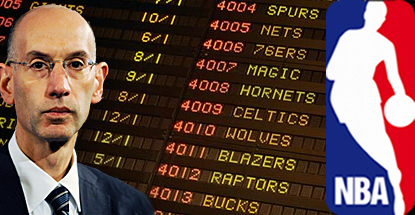 Legal sports betting across the United States is “inevitable” according to National Basketball Association (NBA) commissioner Adam Silver (pictured). Speaking at the annual Bloomberg Sports Business Summit in New York on Thursday, Silver said the fact that “all these states are broke” meant expansion of legal sports betting beyond Nevada’s borders was going to happen eventually and that the NBA “will ultimately participate in that.”

Despite the fact that the NBA was one of the four pro leagues that actively opposed New Jersey’s bid to launch its own legal sports betting market, Silver said he had no moral issues with sports betting, echoing comments made by his predecessor David Stern, who in 2009 told Sports Illustrated that betting could no longer be opposed on moral grounds and that betting represented a “huge opportunity” for the sport.

Silver said having “a gentleman’s bet or a small wager” on a sporting event “makes you that much more engaged” in the event you’re watching. Silver said the UK’s legal sports betting market had proven that wagering on games meant it was “much more likely you’re going to stay tuned” to a televised broadcast for a longer period of time. “That’s where we’re going to see it pay dividends.”

LESNIAK SAYS VETO OVERRIDE CHANCES “AREN’T ALL THAT BAD”
New Jersey politicians are scheduled to meet with Gov. Chris Christie’s counsel on Sept. 10 to see if they can’t hash out a new way of pursuing legal sports betting that doesn’t give Christie schpilkas. State Sen. Ray Lesniak says he’s open to trying to find a solution that Christie can live with, but that’s not stopping Lesniak’s bid to override Christie’s veto of Lesniak’s latest sports betting bill. Lesniak has scheduled a Sept. 22 vote on the matter and, while skeptics abound, Lesniak believes his chances of garnering the necessary 2/3 majorities in both legislative bodies “aren’t all that bad.”

Speaking to ESPN’s new scribe David Purdum, Lesniak said he expects the initial override vote to take place in the state Senate shortly after 1pm on the 22nd. Assuming the bill clears the 2/3 threshold there, Lesniak believes the Assembly will do likewise. While Christie has never seen one of his vetoes overridden, Lesniak said the fact that 68% of state voters had approved the sports betting plan in a 2011 referendum was the differentiator. “Normally, you don’t get [that level of support] in legislation that has been vetoed.”

The bill that Christie vetoed last month was born of a suggestion made by the US Department of Justice during the long legal fight over Lesniak’s previous bill. The DOJ said there was nothing preventing New Jersey from simply not enforcing state laws against sports betting so Lesniak crafted a bill that would lift such prohibitions at Atlantic City casinos and state racetracks. Dennis Drazin, owner of the state’s Monmouth Park racetrack and a strong supporter of legal sports bets, said Lesniak’s bill was “word-for-word with what the federal government said we could do.”

But state Sen. Jennifer Beck, who represents the district in which Monmouth Park resides, said the Sept. 10 discussion with Christie will focus on whether going forward with Lesniak’s plan would prompt a fresh legal challenge from the DOJ/leagues, The state spent over $3m in legal fees unsuccessfully fighting the last legal war and Beck said the state needed to be sure it was “best positioned to be victorious” in a future fight before spending any more taxpayer money. Too bad the state can’t take the NBA commissioner at his word that continuing to stand athwart history is a bad bet.