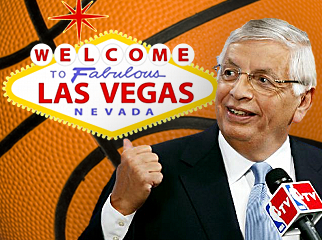 National Basketball Association (NBA) commissioner David Stern believes Las Vegas is a city the league “should embrace,” regardless of it residing smack dab in the only US state currently permitted to accept legal wagers on NBA games. At a press conference at the Wynn Las Vegas on Thursday for the NBA’s board of governors summer meeting, Stern touted Nevada as a “huge entertainment destination” where “gambling is a very legal business regulated carefully.”

Stern noted the proposal by MGM Resorts and Los Angeles-based sports and entertainment conglomerate AEG to build a $350m, 20k-seat arena on the Las Vegas Strip, which would open in mid-2016. Last month, Tim Romani, president of ICON Venue Group, the project management company overseeing the project, told the Las Vegas Review-Journal that the venue would be specifically tailored to accommodate an NBA or National Hockey League franchise.

The NBA Summer League – in which NBA franchises cobble together teams from rookies and other under-utilized players on their existing rosters to evaluate talent under game conditions – makes its home in Las Vegas, and Stern says that already puts the city “in the NBA history books.” Stern said the Summer League had ensured that fans were still talking about the NBA in the middle of July, “which is always very powerful and positive.”

Stern garnered powerful headlines in 2009 after telling Sports Illustrated that the spread of state-level gambling has rendered the NBA’s moral opposition to gambling moot, and thus increased betting on games was a “possibility” that represented a “huge opportunity” for the sport in terms of revenue-generation. Stern was forced to walk back those statements in order to present a united front with the NFL, NHL, MLB and NCAA in their bid to prevent New Jersey from joining Nevada in the regulated sports betting business. But Stern is retiring in February 2014, so apparently his opinions are once again his own.

Contrast that with Stern’s appointed successor, current NBA deputy commissioner Adam Silver, who said he’d be making “no predictions in Las Vegas today.” Silver said he had “no doubt” that Las Vegas might someday figure in league discussions regarding expansion, but “right now, we’re focused on the health of the 30 franchises in the cities they’re located in.” Shame that top league execs only dare to speak the truth when they’ve got one foot out the door, much as politicians who either retire or fail to win reelection almost immediately gain ‘clarity’ on issues like gay marriage or marijuana decriminalization. If nothing else, Stern’s pro-Nevada comments only serve to underscore the hypocrisy of league threats to punish New Jersey’s sports betting bid by preventing the state from hosting various athletic contests.