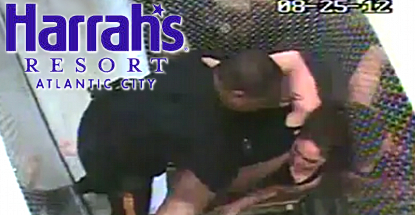 The 67-year-old Straub’s Revel bid was made via Polo North Country Club Inc., the company that operates the Palm Beach Polo and Country Club in Wellington, Florida. Assuming he’s not outbid before Revel’s Sept. 24 auction, Straub said he plans to ditch the Revel name as well as the venue’s former raison d’être. Straub said the reopened Revel “will not be a casino. It might have a casino in it. We don’t need gambling to support what we’re doing.”

Straub said he didn’t have a problem with deed covenants Caesars has slapped on the Showboat that would prevent future owners from reopening the property’s gaming floor. Caesars spokesman Gary Thompson said Straub had yet to contact the company directly but Caesars supported Straub’s vision that “adding non-gaming amenities and attractions are the keys to [Atlantic City’s] recovery.”

HAS ANYONE NOT BEEN BEATEN UP BY HARRAH’S SECURITY?
Meanwhile, surveillance footage has surfaced starring the latest person claiming to have been ill-treated by security personnel at Harrah’s Atlantic City. Late last month, 26-year-old Amy Walsh became the 10th individual to file a civil suit against Caesars over allegedly overzealous behavior by security at Harrah’s The Pool After Dark nightclub. Waslh claims to have been “violently and viciously beaten” following a bachelorette party at the club in August 2012.

Walsh claims her six-member party had paid $600 for bottle service at a table in a roped-off VIP area. The club was dead, so Walsh claims her party asked their server to store their bottle of Grey Goose vodka behind the bar while they mingled. When they returned to their table, they found a club employee had removed one of their chairs, prompting Walsh to complain to a “very hostile” manager, who then called security.

Walsh has accused Atlantic City police officer Dayton Brown of being the worst offender in the “sadistic attack” on her person. In the video below, Brown can be seen grabbing Walsh by the throat in an apparent choke-hold and pinning her to a wall before eventually handcuffing her. Walsh, who claims she was never told she was under arrest, was originally charged with assaulting a police officer, although these charges were later dropped.

The Atlantic City police department has offered no comment on Walsh’s suit. Earlier this year, Atlantic City mayor Don Guardian prohibited city cops from moonlighting as casino security. Caesars maintains that its security staff are “trained to use the least amount of force required to manage any particular incident while ensuring they take the steps necessary to protect guests, employees and themselves.”