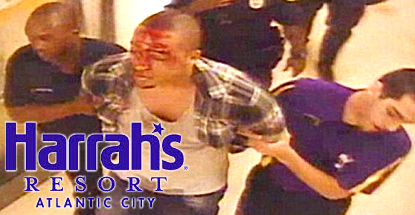 One of Caesars Entertainment’s Atlantic City casino properties is earning a reputation for heavy-handed security tactics. This week saw an episode of ABC News’ 20/20 program detail multiple instances in which guests at Harrah’s Resort Atlantic City hotel-casino claimed to have been unnecessarily roughed up by the property’s security personnel.

Two separate lawsuits were filed this week by parties seeking redress for beatings received at the hands of Harrah’s security. Financial services analyst Robert Coney (pictured) is suing over injuries he received at Harrah’s Pool After Dark nightclub last September. Coney’s suit claims that he was standing near a club exit when a security staffer told him he couldn’t reenter through that door, to which Coney replied that he’d never actually left. Coney was then set upon by two moonlighting Atlantic City police officers, Donnel Holland and Kevin Sketers, who proceeded to club Coney unconscious in what the suit calls a “sadistic gang-like attack.”

Earlier in the week, 26-year-old University of Pennsylvania student Sean Oaks sued Harrah’s after “a whole gang of people jumped on me and piled on and kicked me and hit me in the back of the head.” In May of this year, Oaks had been asked for ID to ensure he was old enough to enter a pool party, but when Oaks objected to the guard ‘twisting up’ his identification, security started “whaling on me.” In the melee that ensued, Oaks claims to have overheard one guard saying “break his arms if you have to.”

Harrah’s is also being sued by the Binns family of Florida over an August 2012 incident in which husband John (a poker pro), wife Renee and 17-year-old daughter Andrea were each violently wrestled to the ground following a dispute over a malfunctioning hotel room key.

Caesars has refused to specifically comment on individual cases while the matters are before the courts. But Caesars spokesman Gary Thompson said company security personnel are “trained to use the least amount of force required to manage any particular incident … while ensuring they take the steps necessary to protect guests, employees and themselves.”

We’re not completely convinced, but we’re told the below video depicts an analyst suffering indignities at the hands of Caesars’ nefarious minions after daring to question Caesars management over the company’s controversial asset transfers. Can’t we all just get along?