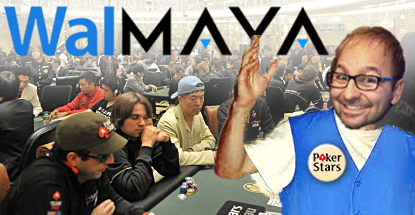 Online poker giant PokerStars closed out this past week with a flurry of positive PR, capped off by the release of a ‘behind the scenes’ video (viewable at the bottom of this page) detailing life at the company’s Isle of Man headquarters. The new spirit of openness reflects the company’s recent acquisition by Canada’s Amaya Inc. (formerly Amaya Gaming) and its ongoing transition from privately held company to publicly traded commodity.

Among the week’s PR coups was the launch of the PokerStars.bg website, marking the first dedicated online poker site to launch in Bulgaria’s newly regulated online gambling market. Stars was awarded its Bulgarian license in February, bringing the total number of jurisdictions in which Stars is licensed to conduct operations to 11, joining Belgium, Denmark, Estonia, France, Germany (but only in Schleswig-Holstein), Greece, Italy and Spain, plus the Isle of Man and Malta.

It’s an impressive tally, but it’s still dwarfed by the number of grey and black markets in which Stars operates and from which it (more than likely) derives the bulk of its revenues. Now that Stars and Full Tilt are under Amaya’s corporate umbrella, the sites will come under increasing pressure to curtail their activities in markets in which their operations are not explicitly legal.

NEW BARRIERS TO OLD REVENUE
The first test will come in the UK, where the Gambling Commission has informed operators seeking to be relicensed under its new gambling regime that they must provide legal opinions supporting their operation in any grey/black market from which they derive 3% or more of their revenue. It remains to be seen how strictly the Commission intends to enforce this edict, but many of the markets in which Stars is currently operating have expressed little to no interest in legitimizing online gambling sites, making it somewhat difficult to legally rationalize continued operations.

Stars’ expected entry into New Jersey’s regulated market is one of the more obvious positives of the Amaya acquisition but, as the past week’s debacle in California proved, Stars is still a long way from securing a seat at the Golden State’s online poker table. There are currently no other states poised to join New Jersey, Nevada and Delaware in regulating their markets, and however dominant a position Stars might stake out in New Jersey, if will be many years before US market revenue can hope to replace the streams Stars loses via withdrawals from other grey/black markets.

CANADIAN CLUB
Canada has featured prominently in player discussions of which grey markets Stars might quit first, given that Montreal is where Amaya currently calls home. Those fears got a boost last week when word spread that Stars had quietly dropped its sponsorship of the Montreal Poker Festival just weeks before the event is set to kick off. However, Stars has since announced a Canada-only online promotion in which every deposit under $50 earns players a ticket to an all-Canuck All-In Shootout tournament.

Canadian players have taken this promotion as a sign that Stars’ reps were serious when they told player forums that Amaya’s $4.9b acquisition of Stars’ parent company had changed nothing and that Canadian players should expect business as usual. But that decision is now Amaya’s to make and Amaya will face pressures that the Rational Group never had to contend with.

In Canada, online gambling is supposed to be the sole responsibility of the provincial lottery corporations that have chosen to expand their operations online (British Columbia, Quebec and Manitoba, with Ontario set to join the party soon). Lottery corp CEOs have previously complained about international operators drinking their milkshakes, but as these companies have no physical presence in Canada, there were few avenues law enforcement could take to deal with the issue. Amaya enjoys no such immunity.

A few observers have pointed to Amaya having technology deals with both lottery corporations and their international competitors as proof that no new conflicts have arisen. But it’s a far cry from being a service provider for a competitor to being an independent operator taking money directly out of these lottery corp’s pockets. Simply put, Amaya’s role has changed and if lottery bosses felt the need to publicly rail against the likes of Bet365, they might well voice much stronger opinions when the company picking their pockets is homegrown.

FRANKENSTARS
Quite apart from its sheer immensity, Amaya is arguably the most diverse gaming company on the planet. In addition to its new online poker dominance, Amaya is a casino software developer, a supplier of lottery technology services and a manufacturer/supplier of land-based gaming devices. Amaya has also announced plans to expand into sports betting and social gaming. All Amaya needs now is to acquire a brick-and-mortar casino company and it can rename itself WalMaya to more accurately reflect its all-under-one-roof full-spectrum gaming dominance.

The pace of consolidation within the gaming industry has amped up considerably in the past year, and companies like Scientific Games and GTECH are also expanding their reach well beyond their core businesses. It remains to be seen whether the management teams of these companies will be able to retain their focus while struggling with corporate schizophrenia AND the hefty debt loads incurred by their acquisitions. For the record, we hope Amaya CEO David Baazov succeeds, because we really don’t want to be sitting here a few years from now talking about the company embarking on a Caesars Entertainment-style ‘restructuring.’