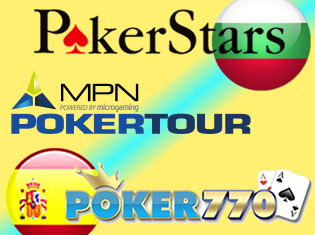 Online poker titan PokerStars is prepping for its debut in Bulgaria’s regulated online gambling market after its license application was approved by the country’s gaming regulators. On Wednesday, Stars announced it had been given a favorable nod by the Bulgarian State Gambling Commission (SGC) just seven months after Stars had its domains added to the country’s blacklist of operators serving Bulgarian punters without the SGC’s say-so. Late last year, Bulgaria’s parliament approved amendments to the nation’s Gambling Act to allow for a 20% gross profits tax rather than the punitive 15% turnover tax online gambling operators had previously been expected to fork over.

Stars is currently putting the finishing touches on its new Bulgarian-facing product to ensure no glitches occur when the company gets the official nod to start dealing cards in the next few weeks. Stars spokesman Eric Hollreiser said the company was “delighted” to be granted access to a market so “full of promise” and was “looking forward to work with the Gambling Commission so that we can launch as soon as possible.” Stars is the first dedicated poker site to be granted a Bulgarian license and only the third gambling site overall, joining Malta-based efbet.com and state-owned lottery outfit Sport Toto.

POKER770 BIDS SPAIN ADIOS
While Stars enters a new market, yet another poker operator has decided competing with Stars in Spain isn’t worth the bother. iPoker skin Poker770 told its Twitter followers last week that it would shutter its Poker770.es site on March 1. While player funds aren’t in any danger, the Curacao-licensed Poker770’s exit will put further stress on Playtech’s struggling iPoker Spain network, as Poker770 is one of the network’s ‘top tier’ skins, along with Betfair and Bet365. iPoker runs a distant third to Stars and 888 Holdings in Spain, which respectively hold 70% and 20% of the overall Spanish poker market. Last year saw multiple operators – including Finnish outfit Paf and Amaya Gaming’s Ongame – withdraw their Spanish-facing poker operations due to a combination of low player traffic and the country’s high tax rates.

MICROGAMING TO LAUNCH LIVE POKER TOURNAMENT
MPN, the poker division of Isle of Man-based online gambling operator Microgaming, is launching a live poker tour. The MPN Poker Tour (MPNPT) will make its debut in London beginning May 29th at Aspers Casino in Stratford. Future dates will hit other European locales, including Malta and Talinn. The inaugural stop in London will feature a “deep-stacked, slow-structured” €550 main event and players can qualify via satellites on MPN skins including Betsson, Betvictor, StanJames and Paf. Further details available at mpnpokertour.com.