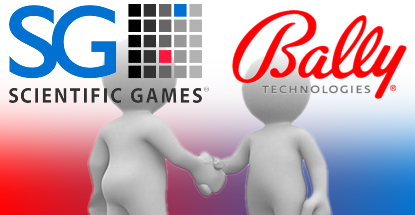 Gaming and lottery technology supplier Scientific Games Corp. (SGMS) has acquired slot machine maker Bally Technologies in a deal worth $5.1b. The deal marks SGMS’ second major acquisition of a rival in the past year, following last year’s $1.5b acquisition of slots maker WMS Industries. It also comes just two weeks after rival International Game Technology (IGT) was acquired by Italy’s GTECH in a deal worth $6.4b.

The New York-based SGMS has agreed to pay shareholders of the Las Vegas-based Bally $3.3b as well as assuming $1.8b of Bally’s debt, much of the latter stemming from Bally’s 2013 acquisition of rival SHFL Entertainment. The combined entity is expected to generate annual revenue of around $3b and SGMS expects to realize around $220m in annual cost savings via the employee bloodletting that will likely follow the acquisition.

SGMS CEO Gavin Isaacs said the deal came about after SGMS approached Bally a month ago. Isaacs said the consolidated business “brings together best of breed cultures” and provides a “one-stop shopping” for gaming companies looking for the latest technology. On a personal level, as a former COO of Bally and CEO of SHFL, Isaacs said the deal represented “a dream come true.”

Isaacs is expected to continue as CEO of the expanded SGMS while Bally CEO Richard Haddrill and chairman David Robbins will get seats on SGMS’ board of directors. Given both companies are recent merger veterans, Isaacs expects a more or less “seamless” assimilation and a done deal by early next year.

Isaacs doesn’t expect competition watchdogs to block the deal as the combined entity will still be smaller than the united GTECH/IGT, but Stifel analyst Steven Wieczynski said the new SGMS’ North American slot machine market share will be “in line to slightly higher” than GTECH/IGT. Suffice it to say, consolidation in the gaming arena is becoming a bloodsport and mergers & acquisitions law firms are at increased risk of injury due to all the champagne corks flying around their offices.